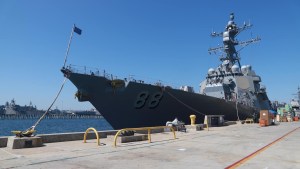 The USS Preble at Naval Base San Diego in June. The HELIOS laser is visible just under the bridge. Navy photo

Lockheed Martin has installed the first operational anti-missile laser aboard a San Diego-based destroyer for testing over the coming year.

The HELIOS laser was installed on the USS Preble and integrated with its sophisticated Aegis radar and fire-control system during maintenance at Naval Base San Diego.

Published reports indicate the weapon can be used to both “dazzle” and destroy cruise missiles, drones and small boats.

A post on the destroyer’s Facebook page said the ship is now “the most lethal warship in the US Navy!”

The laser is rated at 60 kilowatts, but reportedly can be upgraded to 120 kilowatts.

The U.S. military has extensive programs to develop laser weapons because they are potentially far more economical and accurate than guns or guided missiles.