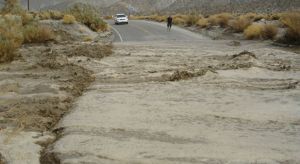 A flash flood washes over Route 78 in San Diego County from another time in this file photo.

The National Weather Service has issued a flash flood watch and a warning of severe thunderstorms for San Diego County mountains and deserts until 8 p.m. Saturday.

Flooding caused by excessive rainfall continues to be possible, the NWS said. The flood watch was issued at 11:37 a.m. Saturday.

“Excessive runoff may result in flooding of rivers, creeks, streams, and other low-lying and flood-prone locations,” forecasters said. Scattered thunderstorms could occur, some of which may produce torrential rainfall of 1 to 2 inches.

Severe thunderstorm warnings were issued for a couple of storms, including one over Campo near the border. The storms are capable of 60 mph winds, heavy rain and hail.

“It’s best to avoid travel in those areas,” the weather service said.

The monsoon weather pattern was expected to continue through next week, leading to a daily risk of thunderstorms over the mountains and deserts, the NWS said .

Moisture levels could be highest Saturday with flash flooding possible over the mountains and deserts, forecasters said.

One rogue heavy shower hit the National Weather Service office in Rancho Bernardo on Saturday, where about one-third of an inch fell in less than one hour.

Little day-to-day temperature changes were predicted for the next several days, while humidity will remain high.

“In the meantime, we’ll have similar weather, though not quite as hot, for the next five days or so,” forecasters said.