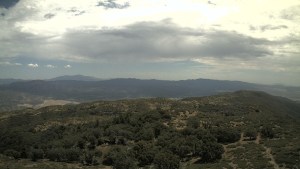 A thunderhead is seen from High Point on Palomar Mountain in July. Image from UCSD HPWREN camera network

The weather service said thunderstorms could drop as much as an inch of rain per hour in the afternoon and evening.

“Scattered thunderstorms with heavy rainfall are expected for this afternoon and early evening for the mountains and deserts with the greatest coverage and rainfall in the mountains,” the agency said.

are expected once again Thursday due to another influx of #Monsoon2022. We've issued a flood watch for the mountains & deserts. #CAwx pic.twitter.com/Izo3daxTT7

Excessive runoff from rain can result in flooding of rivers, creeks, streams and other low-lying and flood-prone areas.

Those living in areas prone to flooding should be prepared to take action in the event of flooding, the weather service recommends.