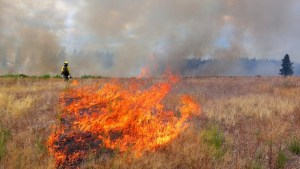 A prescribed burn in the Pacific Northwest. Courtesy USDA

The U.S. Forest Service on called a temporary nationwide halt to controlled burns meant to reduce fire risk after the agency accidentally started part of New Mexico’s largest ever wildfire.

The Hermits Peak and Calf Canyon fires have burned over 300,000 acres, destroyed up to 1,500 properties and displaced tens of thousands of people, and is still out of control.

Forest Service Chief Randy Moore announced Friday that fire danger levels were too high to use prescribed fire and ordered a 90-day review of policies before operations planned for this fall.

“Lessons learned and any resulting program improvements will be in place prior to resuming prescribed burning,” Moore said in a statement.

The move stops a practise many forest biologists see as crucial to reducing high fuel levels in national forests after a century of fire suppression and decades of logging bans in the case of New Mexico.

However, they are also concerned about the potentially devastating effects of prescribed fire if misused.

A Forest Service managed burn near Las Vegas, New Mexico, went ahead despite forecasts for high winds and went out of control on April 6.

“I can’t imagine who would have gone through and signed off on it on the ground and put fire on the ground, that to me is mind boggling,” said Joshua Sloan, a forest biologist at New Mexico Highlands University, who has carried out controlled burns and is an advocate of the practise.

The fire later merged with another wind-driven blaze, the cause of which is under investigation, to form the Hermits Peak and Calf Canyon fires.

The blaze has also torched forests and watersheds used for centuries by Indo-Hispano farming villages and Native American communities, and now threatens villages in the Peñasco Valley as well as the resort towns of Taos and Angel Fire.

In a statement, New Mexico Governor Michelle Lujan Grisham said she met with Moore on Friday and called for “additional local consultation and greater consideration” before controlled burns on federal lands during the state’s windy season.