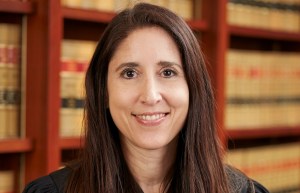 Patricia Guerrero was joined by her family during her swearing-in to the California Supreme Court in March. Photo via @CAgovernor Twitter

A former San Diego appellate justice was nominated by Gov. Gavin Newsom Wednesday to serve as chief justice of the California Supreme Court.

Guerrero, 50, of Coronado, would replace Chief Justice Tani Cantil-Sakauye, who announced last month that she would not seek another term.

“Justice Guerrero has established herself as a widely respected jurist with a formidable intellect and command of the law and deep commitment to equal justice and public service,” Newsom said in a statement.

“A first-generation Californian from the Imperial Valley, Justice Guerrero broke barriers as California’s first Latina Supreme Court justice, enriching our state’s highest court with her insights and deep understanding of the real-world impacts of the court’s decisions in the lives of everyday Californians. I thank Justice Guerrero for her willingness to step into this role and am confident that the people of California will continue to be well served by her leadership for years to come,” the statement continued.

“Justice Guerrero, who has tremendous legal experience at the state and federal level – including her time as a judge on the San Diego Superior Court – has a work ethic and judicial temperament that will be invaluable as we navigate the many challenges facing our state,” said Senate President Pro Tem Toni Atkins of San Diego, in a statement Wednesday.

“I am humbled by this nomination to lead our state’s Supreme Court and thank the governor for entrusting me with this honor,” Guerrero said. “If confirmed, I look forward to continuing the strides the court has made under Chief Justice Cantil-Sakauye to expand equal access to justice and create a fairer justice system for all Californians.”

Guerrero is an Imperial Valley native who served at the Fourth District Court of Appeal, Division One in San Diego since 2017. Prior to her appointment to the appellate court, Guerrero was a San Diego Superior Court judge, as well as a former assistant U.S. attorney in the Southern District of California.