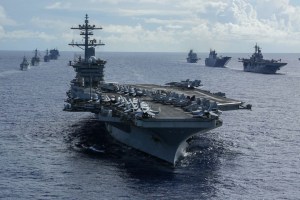 The world’s largest international maritime exercise concluded Thursday following more than a month of operations in and around the Hawaiian Islands and Southern California.

The biennial exercise, which seeks to ensure the United States and its allies can operate jointly in the Pacific, ended amid growing tensions with China over Taiwan. The communists fired missiles over the island democracy Thursday in protest of House Speaker Nancy Pelosi’s visit.

But the size of the countervailing U.S. alliance was on display at the 28th biennial Rim of the Pacific exercise. Twenty-six nations, 38 surface ships, three submarines, nine land forces, more than 30 unmanned systems, approximately 170 aircraft and over 25,000 personnel participated.

U.S. Navy Vice Adm. Michael Boyle, commander of RIMPAC, said the working relationships strengthened during the exercise “are critical to ensuring the safety of the sea lanes and the security of the world’s interconnected oceans.”

Japan Maritime Self-Defense Force Rear Admiral Toshiyuki Hirata, the vice commander of RIMPAC, said that in the current security environment, it is important for the international community to work together. “It is of great significance to deepen and strengthen the relationship of trust,” he said.

His comments came as one of the missiles fired by China landed in waters that are part of Japan’s economic zone.

This RIMPAC was marked by a number of firsts:

• Two Marine Corps MV-22 Ospreys embarked on the Australian amphibious ship HMAS Canberra for the duration of the exercise.

• While participating in RIMPAC for the first time, the New Zealand ship HMNZS Aotearoa conducted numerous replenishment at sea operations with partner nations including France, Australia, Canada, Malaysia and the United States.

• RIMPAC featured the first embedded use of the MQ-9A and MQ-9B unmanned aerial vehicles, and the unmanned surface vessels Nomad, Ranger, Sea Hawk and Sea Hunter.