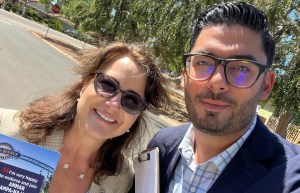 “I’m proud to endorse Ammar Campa-Najjar for Mayor of Chula Vista, a rising star among the next generation of leaders,” said Newsom.

“From his first job as a community organizer in Chula Vista for a presidential campaign, serving in the White House, advocating for small businesses at the United States Hispanic Chamber of Commerce in Washington, D.C., fighting for the American worker in the U.S. Department of Labor, Ammar has devoted his life to service,” the governor said in his endorsement.

Padilla said he expected Campa-Najjar to “use his broad experience to bring new jobs, housing opportunities, and revenue to Chula Vista. I’m confident that he will harness the boundless potential of Chula Vista’s diverse, hard-working, and entrepreneurial community to lead the city into a better future.”

Campa-Najjar, who faces Republican City Councilman John McCann in November, has also picked up endorsements from Rep. Juan Vargas and a key primary opponent — City Councilwoman Jill Galvez — who is now campaigning for him

“Ammar is a collaborative leader who will bring our city together and get things done,” said Galvez. “I strongly encourage my supporters, constituents, friends and neighbors to vote for the only ethical choice this election, Ammar Campa-Najjar.”

Campa-Najjar, who grew up in Chula Vista and ran for Congress twice in East County, said he is “honored to have the full support of national, state, and local officials across the board ahead of November.”

If elected on Nov. 8, he would be the first Latino-Arab American to hold elective office in the United States.