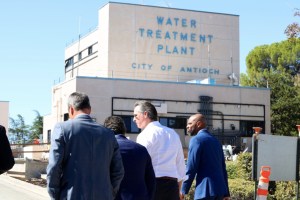 Newsom announced plans Thursday at a desalination plant under construction in Antioch. Photo via @CAgovernor Twitter

Governor Gavin Newsom unveiled a new water strategy on Thursday that plans for a future with 10% less water and shifts the emphasis from conservation to capturing more water that otherwise flows out to sea.

Climate change has contributed to more severe drought but has also set the stage for more intense flooding when rain does fall, as was demonstrated last week in California’s Death Valley, one of the hottest, driest parts of the United States.

Without action, extreme weather could diminish our water supply by up to 10% by 2040. So we’re acting now.

CA’s Water Supply Strategy outlines how we can replace what we’ll lose including ways to store, recycle, conserve, & de-salt like they are at Antioch Brackish Desalination. pic.twitter.com/4jd2Fevxzz

The state has budgeted more than $8 billion in the past three years to modernize water infrastructure that Newsom said would generate enough water for 8.4 million households in a state of 40 million people.

His plan calls for creating storage for 4 million acre-feet of water and recycling or reusing 800,000 acre-feet per year by 2030 in addition to more stormwater capture and desalination projects.

An acre-foot of water is generally considered enough to supply two urban households per year.

California and the West have experienced a megadrought since the turn of the century that some scientists have measured as the driest 22-year period in 1,200 years, with many of the conditions attributed to human-influenced climate change.

State officials estimate hotter and drier weather will reduce existing water supplies by 10% by 2040. In addition, the state’s allotment of water from the Colorado River is expected to be cut next year, U.S. Bureau of Reclamation officials have told Congress.

Many consumers have ramped up conservation with the increased public awareness of recent years, Newsom said, leaving less room for additional cutbacks.

“While conservation has become a way of life in San Diego County, it’s clear that we cannot conserve our way out of the more frequent severe droughts afflicting the arid West,” Kerl said. “Both here and across the state, we must continue making strategic investments in supply reliability.”