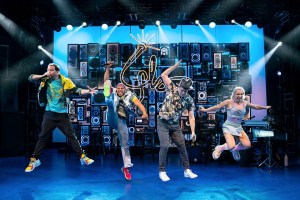 The hip hop improvisers of the national tour of “Freestyle Love Supreme” at The Old Globe. Photo by Jean Marcus

When you add in rhythm and rhyme, a human percussionist and two killer keyboardists, speed and agility — physical, mental and verbal —  what you’ve got is hip hop improv, brilliantly embodied in the Tony Award-winning “Freestyle Love Supreme,” now making a stop at The Old Globe as part of its first national tour, after two successful Broadway runs (pre- and post-pandemic), which earned them a Special Tony.

The FLS concept originated 18 years ago with Anthony Veneziale (AKA Two Touch), who used to have freestyle rap sessions in the basement theater of New York’s Drama Book Shop with his former Wesleyan University classmates: Lin-Manuel Miranda (who later would famously write “In the Heights” and “Hamilton”) and Thomas Kail (who would go on to direct those two Broadway hits, as well as FLS).

The show’s title was inspired by world-renowned saxophonist, composer, pioneer and jazz improviser nonpareil, John Coltrane; specifically, one of his most acclaimed albums, 1964’s “A Love Supreme.”

The tour has a rotating corps of ace performers, and every show is unique, because the suggestions for the freestyle rap come from the audience. Each performance is created live, on the spot. That keeps it fresh and exciting. And sometimes, downright mind-blowing. Of course, as with all improv, not every effort lands. But it all goes by so fast, it barely matters.

Don’t miss the Hulu documentary about the origins and workings of FLS, “We Are Freestyle Love Supreme.”

Audiences love the participation aspect; they like having their say and being heard. Especially now, after the 2-plus years of isolation we’ve all endured.

This is just what the doctor ordered: an evening of sheer, unadulterated joy. It’s clear that the crackerjack cast is as delighted by what they’re doing as we are. They get an obvious kick out of each other’s creations.

At the performance I attended, I was thrilled that Veneziale was the host MC (there are three on the tour). He’s amazingly fast on his feet (literally and verbally). And very funny. The overall speed of the thinking and rhyming is really breathtaking.

Under Kail’s superb direction, there’s a general structure to the 90-minute show.

The group will choose from word suggestions that come from using the QR code in the program. They’ll ask folks to call out “a verb” (“deliberate” was the one chosen at my performance, and it was very wisely, humorously and politically employed). They’ll ask for you to call out things that really annoy you, or something you can’t live without.

They’ll re-create someone’s day. And they’ll re-enact someone’s story about an event that happened to them that they wish they could have dealt with better. It gives the participant a satisfying little time-traveling, rectifying opportunity.

They’ll even rap a bit about their own personal history.

Perhaps most impressively, they’ll circle back to ideas that were thrown out (and rejected) earlier, and tie it all up at the end with reviews and reiterations and hilarious references to what they’d already done.

Much of it is random  — depending on the suggestions they get or take — and a great deal of it is laugh-out-loud funny.

The two expert musicians: Shifty Hills (James Rushin) and Gigawatts (Victoria Theodore) are improvising along with the rappers. Even the lighting operator (design by Jeff Croiter) gets in on the act, turning on a dime to support the rapidly-changing efforts.

The 2016 world champion Beatboxer, Mandible (Mark Martin) is a walking sound/language/noise machine, a rhythm section with hand motions and moves to boot.

Each of the rappers I saw (there are seven on the tour, some of whom appeared on Broadway)  was singularly talented: along with Veneziale, there was Jellis Jay (Jay C. Ellis), Dizzy (Dizzy Senze), and Hummingbird (singer/songwriter Morgan Reilly, who sings (often stratospherically) all her improvs and rhymes. For an audience experience set in Greece, she used songs from “Mamma Mia” as her springboard.

It’s a trip to watch them do their thing.

“Freestyle Love Supreme” may not be theater per se. It probably won’t send you out thinking Big Thoughts. But it will leave you awed by the talent you’ve seen. And it makes for a terrifically fun night out.