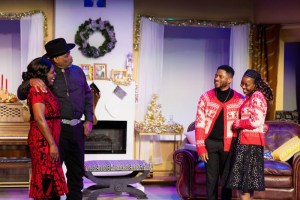 The theater, at the Dea Hurston New Village Arts Center, also will play host to the return of an original holiday musical commissioned by the company.

Kristianne Kurner, the theater’s founder and executive artistic director, calls it “the most ambitious season in our history. With the renovation of our Carlsbad Village home and the
renaming of our building and theatre, we knew it was important to include some statement plays this season.”

The season includes productions focused on characters confronting times of change in their lives, Kurner said, prompting “the choice between keeping things the way they have always been or stepping out into the unknown to make a different life.”

The newly renovated arts center will re-open Dec. 3 with the return of 1222 Oceanfront: A Black Family Christmas, written by Hurston – who was honored this month when the center was named for her – with original songs from Milena (Sellers) Phillips. The show’s run ends Dec. 24.

Next up is Jez Butterworth’s 2019 Tony Award-winner The Ferryman, from Feb. 4 to March 5. New Village Arts is the first theatre company outside of London and New York to be
granted the rights to produce the thriller, which takes place in Northern Ireland in 1981. Kurner will direct.

The two-person show The Roommate, written by Jen Silverman, will be directed by Samantha Ginn. The dark comedy, from April 1-23, features Phillips and Kim Strassburger.

The season concludes with Singin’ in the Rain, from May 20 to July 2. The classic movie musical will be re-created in the theater’s signature style – rendering large-scale musicals in an intimate way that focuses on storytelling.