Hollywood Celebrities Among Those Warned of Water Waste During Drought 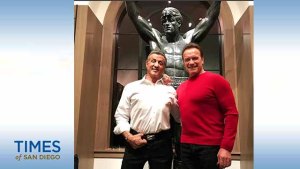 Sylvester Stallone with Arnold Schwarzenegger in front of the recently auctioned Rocky statue. Image via Instagram

Rules for thee but not for me?

Residents across the state including those in San Diego County are being urged to reduce their water use in response to a protracted drought, but some big celebrity names are being called out for allegedly not doing their share.

The Las Virgenes Municipal Water District has sent warning notices to more than 2,000 of its customers who have exceeded their monthly water budgets at least four times since the declaration of a drought emergency late last year, the Los Angeles Times reported. Among those receiving the notices were Kim and Kourtney Kardashian, comedian Kevin Hart, retired basketball star Dwyane Wade and actor Sylvester Stallone, The Times reported.

“Customers are expected to adhere to the water use reductions and water conservation measures that are in place due to this emergency,” the notices read, according to the Times, which obtained copies of the documents through a Public Records Act request.

The Times reported that Wade’s Hidden Hills property exceeded its water allocation in June by 1,400%. Wade and his wife, Gabrielle Union, wrote in a statement to the Times that the overage was due largely to a problem with their pool, but they said they’ve taken “drastic steps” to cut their usage.

“We have replaced all parts of our pool system that (have) to do with water flow and leakage in addition to converting to synthetic grass and drought tolerant plants to reduce our water usage,” they said in a statement. “We will continue to work with the city and the water distribution company to make sure this isn’t an issue moving forward.”

Stallone’s attorney, Marty Singer, sent the paper a statement saying the actor has also taken steps to cut water use but noted the actor and his wife “have more than 500 mature trees on the property” that require adequate watering. He said the couple is awaiting an inspection by the city to obtain further guidance on how to handle the watering of the trees.

The Times reported that the list of people receiving warning notices from the district also included attorneys, doctors, and Hollywood executives. Representatives for Hart and the Kardashians did not respond to the Times’s request for comment.

An LVMWD representative told the Times that it will install “flow restrictors” at properties that prove to be the worst offenders and fail to address the water use issue. Mike McNutt told the paper he hopes celebrities step up and set an example.

“People listen to you, people look at you, people value what you do,” he said. “… We need you to step up to the plate, to be examples, and to be leaders so that other people will follow. That is the most critical thing that anybody in that bracket, or that has those resources, can do to influence and help with other people’s behavior modifications.”