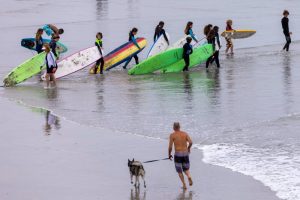 A man runs with his dog as a surfing class enters the ocean during a heatwave in Oceanside. REUTERS/Mike Blake

Warming conditions were likely through early next week, with highs topping out 5 to 12 degrees above normal by Sunday.

Subtle increases in moisture aloft were expected to lead to increased mid-level cloud coverage and a slight chance of showers and isolated thunderstorms across the southern mountains and lower deserts on Monday.

On Friday, the NWS said Escondido and El Cajon tied the highest minimum temperature records, both at 65 degrees.

Hot and dry weather was expected through early next week inland, while sea breezes moderate coastal areas each day.

Some increase in humidity was expected by Monday, but it likely will remain quite hot, with gusty late day and evening winds below passes and canyons. The chance for any thunderstorms was very small Monday and Tuesday, but could result in a few dry lightning strikes.

Temperatures were predicted to be above average through midweek, then back to about average Thursday and continuing to fall into the July 4th holiday weekend.

The combination of heat, gusty winds, and low afternoon humidity was expected to keep elevated fire weather conditions on the desert mountain slopes and into the deserts for a few hours each day.