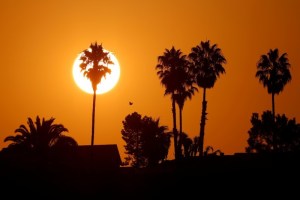 August will end on a high note in the San Diego area — extremely high temperatures, that is — and the beginning of September will bring no respite from the muggy summer swelter, forecasters reported Monday.

With a week of torrid conditions expected across the region, the National Weather Service issued an excessive-heat warning, effective from 10 a.m. Tuesday to 8 p.m. next Monday.

Over the period, thermometer readings will rise well into the 80s at the beaches, the 90s in the inland valleys and up to 115 in the deserts, and high humidity levels will make it feel even hotter, the NWS advised. Nighttime will bring only modest relief, with minimum temperatures no lower than the 70s.

The big focus of the forecast this week is a long duration heat wave through Labor Day Weekend. Temperatures today will be 5 to 10 degrees warmer than yesterday away from the coast, with warming continuing into next week. #CAwx pic.twitter.com/TgzjSPQ0he

The soaring temperatures will significantly increase the potential for heat-related illnesses, particularly for those working or exercising outdoors, meteorologists cautioned.

Check out this graphic for more tips on preparing for the heat! pic.twitter.com/CbUo6DvssV

The weather service advised drinking plenty of water during the extra-hot spell while avoiding dehydrating alcoholic, sugary or caffeinated drinks; dressing in lightweight, light-colored clothing; eating small but more frequent meals; keeping an eye on those who may be particularly vulnerable to the heat, including small children and the elderly; and staying indoors during the hottest parts of the day, if possible.