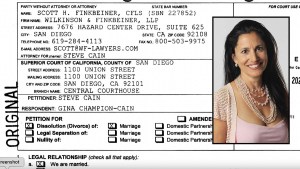 Except for the length of the marriage — their 32nd anniversary was last week — and the fact no children are involved, the filing is unremarkable. But his wife’s name makes the case compelling.

The one-time real-estate-and-restaurant wonder woman and charity maven — named a 2013 “Woman of Distinction” by San Diego Woman Magazine and having a day named in her honor — is serving a 15-year prison sentence in a minimum-security camp in the East Bay town of Dublin.

Her blockbuster crime made international headlines: a nearly $400 million Ponzi scheme defrauding hundreds of investors. San Diegans Barbara Bry and her husband, Neil Senturia, are publishing a book titled “I Did It” on her career next month.

Steve Cain, a founder of the binational firm Pacific Pulp Molding, has not been accused of wrongdoing. In fact, Champion-Cain kept secret her criminal acts from him, she suggested in a January deposition.

But according to a San Diego Union-Tribune report, the court-appointed receiver was able to recover $1.3 million from Cain, involving the “refinancing of the couple’s family home in Old Town.” (Mission Hills is more often listed as their neighborhood.)

But some revelations may emerge Sept. 14 at a so-called family resolution conference before Judge Jose Castillo at the downtown court.

Steve and Gina at a Liberty Station wine-tasting in 2012. Image via Facebook

Among other things, Cain, 60, wants the court to order Champion-Cain, 57, to pay his attorney fees and calculate all community and quasi-community property acquired in the marriage.

He also wants the court to prevent Champion-Cain from getting spousal support. And he reserves “for future determination” the issue of having Champion-Cain pay him alimony.

‘Bet She is Stunned’

Word of the divorce has been limited, with longtime friends of the couple expressing shock.

“I really thought he’d stick with her,” one told Times of San Diego. “I bet she is stunned. Wow wow wow.”

Champion-Cain, inmate 96841-298, is hard to reach. Author Bry, the former San Diego councilwoman and current office-seeker, says: “Gina does not communicate with the media.”

According to federal prison records, her release date is Jan. 9, 2034, when she’ll be 68. That means she’d have served 12 3/4 years instead of the 15-year maximum sentence handed down by Judge Larry Burns.

Not much is publicly known about Steven Erik Cain. His own company website doesn’t mention him. (And that’s been the case for many years, according to early versions of pacificpulp.com on archive.org.) A glowing two-page profile of Champion-Cain in San Diego Woman magazine didn’t even mention Cain.

He graduated in 1985 with a bachelor’s degree from the College of Communication Arts and Sciences at Michigan State University. In San Diego, Cain made at least one donation in 2006 to then Democratic Assemblyman Juan Vargas (for $250).

(By contrast, Champion-Cain has given thousands of dollars over time to Democrats, including Barack Obama in 2007 and Congress members Susan Davis and Scott Peters, but also Republicans such as San Diego City Council candidate Carl DeMaio and governor hopeful John Cox of Rancho Santa Fe.)

So it’s no wonder that that celebrity-profiling sites are unclear on her marital status.

“Gina Champion-Cain husband information is not available,” says one site. “Therefore we have no idea if she is married or not.”

Said another: “Reportedly Gina Champion-Cain is married and used to reside in north Mission Hills with her husband before her arrest. Champion’s spouse has decided to stay out of the limelight.”

“I now know that it was all an illusion, a make believe world,” she told Judge Burns. “But I kept thinking that once I finally sufficiently monetized one of my business ideas through an IPO, I would have enough money to pay everyone back with profit, and I would stop the fraud once and for all, leaving everyone happy and no one harmed by what I had done.”

She later added: “I do take comfort in caring for my dogs, being there to cook daily for my husband, connecting with people who have reached out to me in order to care for me — while I await the next phase of my journey.”

Investor groups are collecting tens of millions of settlement dollars from Chicago Title — whose escrow workers were part of the Ponzi scheme. But Champion-Cain is far from being out of the financial woods.

“The United States respectfully requests that the court issue an order of restitution in favor of the scheme’s Net Losers, consistent with the Receiver’s [money-in-money-out] analysis,” concluded San Diego U.S. Attorney Randy Grossman in a filing Monday.

“The United States will seek to submit a proposed order of restitution after the consecutive August 29 hearings in the SEC case and this case.”