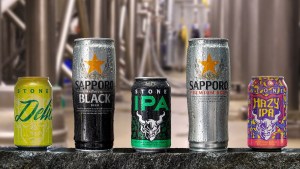 Stone Brewing, San Diego’s largest and best known craft brewery, said Friday it will be acquired by Japan’s Sapporo in move to increase both companies’ production capacity and distribution.

The two brewers said the “east-meets-west” merger would combine “Japanese artistry” with “American craft brewing tradition.” The deal is reportedly worth $165 million.

Sapporo, founded in 1879, will produce its beer alongside Stone’s brands in Escondido and Richmond, VA, and invest in those facilities to double output.

Stone will continue to operate its seven Tap Rooms and World Bistro & Gardens destinations with existing branding, management and workforce under the Sapporo umbrella.

“This is the right next chapter for Stone Brewing,” said Greg Koch, co-founder and executive chairman. “For 26 years, our amazing team has worked tirelessly to brew beers that have set trends and redefined expectations.

“To have the interest of a company like Sapporo in continuing the Stone story is a testament to the great beers we’ve created and will continue to create for our fans across the globe,” Koch said.

The San Diego brewery is the second acquisition in the growing craft brew segment by Sapporo following the purchase of Anchor Brewing in 2017.

Stone Distributing Co., Stone’s distribution business, is not part of the sale, and will become an independent company under current ownership. It will continue to will continue to serve the Southern California market with a portfolio of 42 distinctive craft brands,