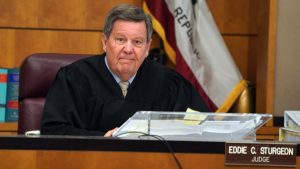 Branding Nicholas Ratekin a “vexatious litigant” for his “abuse of the court system,” a Superior Court judge slammed shut the former San Diegan’s lawsuit against the University of San Diego.

Judge Eddie C. Sturgeon canceled a trial scheduled for November in the breach-of-contract case and levied a series of financial penalties against Ratekin, who starred in water polo at UC San Diego and coached Canyon Crest Academy to two CIF water-polo titles.

Michael S. Dell, the billionaire founder of the computer company that bears his name, won a motion to quash Ratekin’s subpoena and was granted a protective order. Dell sought no money. Others won similar rulings.

Ratekin told conservative media outlets, including San Diego News Desk of the county Republican Party, that he lost his student teaching jobs and his spot in the master’s of education program at USD as a victim of “cancel culture.”

Specifically, he alleged that he was “disenrolled” from USD “based on his political beliefs and support of President Donald J. Trump.”

In the end, Sturgeon wrote July 19 that Ratekin, acting as his own attorney, “repeatedly abused the litigation and discovery process throughout this case by, among other things, repeatedly violating this court’s March 14, 2022 order, serving voluminous and harassing discovery on nonparties, and filing repeated baseless ex parte applications.”

Since it was apparent that Ratekin would not be dissuaded from “continuing his abusive tactics,” Sturgeon issued an order forbidding the Brush Prairie, Washington, resident from filing any new litigation in California courts by himself “without first obtaining leave of the presiding justice or presiding judge of the court where the litigation is proposed to be filed.”

Ratekin faces contempt of court charges if he disobeys Sturgeon.

But Ratekin also sued the San Diego Unified School District and his former legal team — San Diego Law Groups — for defamation or overcharging. Those cases are still listed as pending.

(He’ll be busy the morning of Nov. 4 — with case management conferences set for 9:30 in the San Diego Unified suit before Judge Katherine Bacal and at 9:45 in the law-group matter before Judge John S. Meyer.)

Ratekin didn’t respond to a request for comment. Neither did USD or its three-member legal defense team in the case filed six days after the 2020 presidential election. (But Tuesday night, Ratekin filed a notice of appeal to challenge the summary judgment in the 4th District State Court of Appeal.)

Judge Sturgeon described how Ratekin, after his attorney asked to be relieved, began serving an “extreme amount of discovery (over 100 subpoenas) on a broad range of parties, including local, state and federal officials, agencies and educational institutions as well as various individuals.”

Despite a court order March 14 that he end discovery unless the judge gave advance OK, Ratekin filed ex parte applications seeking relief from the protective order.

Since a hearing June 7, Ratekin filed more than 40 declarations in support of his various motions and oppositions “containing wholly irrelevant information,” the judge wrote.

“Numerous declarations were filed by his grandfather and other family members regarding the ownership of a fax machine that was used to transmit subpoenas from December 2021 to May 19, 2021, and that those subpoenas were sent independent of plaintiff.”

“Past water polo teammates, coaches and other acquaintances [spoke] to Plaintiff’s water polo acumen, academic performance and general character but [provided] nothing of relevance as to this case,” the judge wrote.

Nick Ratekin filed an amended complaint a day before judge heard many motions in case. (PDF)

“Many of these declarations attach various documents without exhibit lists, proper explanation or authentication. Needless to say, Plaintiff’s approach to this litigation has made it untenable, unmanageable and an abuse of the court system.”

Sturgeon shot down Ratekin’s claims of breach of contract, breach of the covenant of good faith and fair dealing; fraud in the inducement; negligent misrepresentation; unjust enrichment; violations of California Business and Professions Code; violations of the Consumer Legal Remedies Act; and untrue and misleading advertising.

“Plaintiff has provided no persuasive reason for changing the venue from San Diego to Riverside at this stage in the litigation,” Sturgeon wrote in his final ruling. “The parties, including Plaintiff, waived jury trial at the December 6, 2021 case management conference … thus even accepting Plaintiff’s arguments at face value there is no risk of a biased jury pool. Plaintiff has not presented any evidence of this court’s bias and the court finds none.”

Ratekin’s name will be added to a 65-page list, updated monthly, of vexatious litigants kept by the Judicial Council of California.

In late August 2021, GOP media outlet San Diego News Desk said: “All things considered; Nick was on his way to a promising career until word broke out that he was a Republican.”

Writer Natalia Perez continued: “Due to Nick’s conservative beliefs, he lost his jobs and his education, which he has spent thousands of dollars on. Unfortunately, many conservatives face this far too common experience in today’s politically correct/cancel culture environment…. Nick is confident that, unlike our education system, the judicial system will maintain its integrity and not succumb to the ‘woke mob’ of modern liberalism.”

Officials of the Republican Party of San Diego County didn’t respond to emailed requests for comment.