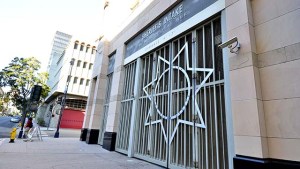 A federal judge Monday denied a request from attorneys representing people incarcerated in San Diego County’s jails to make immediate changes to the region’s jail policies in order to curb deaths among those behind bars.

The ruling stems from a lawsuit alleging the county’s policies and procedures are insufficient to protect inmates and contribute to what the attorneys allege is a higher jail death rate than other large California counties and the nation at large. Attorneys representing inmates say 18 people died in the county’s jails last year, and that mark was on pace to be exceeded in 2022.

The frequency of deaths prompted a California State Auditor investigation that found deficiencies in the sheriff’s department’s policies and practices regarding inmate safety checks, mental health treatment and staff responses to emergencies.

The injunction sought would have required the sheriff’s department to focus on prevention of drug overdoses in the jails, ensuring timely safety checks for those in solitary confinement, fixing broken intercoms and video cameras to ensure staff are aware of emergencies, prioritizing housing recommendations made by mental health clinicians, providing confidential mental health care and providing safe and accessible housing for people with disabilities.

At a hearing before U.S. District Judge Anthony Battaglia last week, an attorney representing the county said changes and improvements have already been instituted at county jail facilities. Those include upgrading and auditing the jails’ audio and video systems and implementing improved methods for preventing deadly drugs from entering the jails.

In a written ruling issued Monday, Battaglia stated that though he “fully appreciates the seriousness of the allegations brought by plaintiffs regarding the conditions and high death rates in the San Diego County jail facilities,” he wrote the plaintiffs did not “meet their burden” to secure an injunction.

While the judge wrote that the county had “not provided any facts supporting their contention that ‘the allegedly wrongful conduct could not reasonably be expected to recur,’” he said the plaintiffs’ “requested relief is far-reaching and overly broad” and that more specific recommendations are needed.

Despite the injunction denial, the lawsuit will continue, and Battaglia wrote that he expects the legal process “will no doubt edify the merits of plaintiffs’ claims beyond what currently exists and will assist the court in understanding the true depths of the problems alleged as well as the remedies available.”