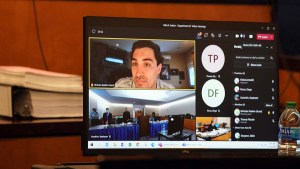 Nick Ratekin as seen virtually from home during a March 2022 hearing. Photo by Ken Stone

Briefs for and against depositions and subpoenas in Nick Ratekin suit vs. USD. (PDF)

Also getting old (for the court and others): Ratekin’s unceasing efforts to depose and subpoena individuals and agencies, and flooding various offices with unwanted emails and faxes.

“Discovery statutes are very broad in the state, even discovery that could lead to discovery,” Sturgeon said after listening to Ratekin for 10 minutes. But laws don’t permit “a fishing expedition,” he said.

Sturgeon said the 27-year-old Washington state resident’s requests have no relevance to his lawsuit — which seeks a variety of unspecified monetary damages for loss of work, tuition and “humiliation, mental anguish, emotional distress and harm to his reputation.”

(Ratekin is alleging USD is guilty of fraud, breach of contract, false advertising, violations of several state codes and “unjust enrichment” after dropping him from its teacher-training program. Trial is set for Nov. 4, but USD will ask that the case be thrown out in a “summary judgment” hearing July 15.)

Sturgeon will hold another hearing Tuesday morning on that request, giving Ratekin until noon Monday to explain why such an order shouldn’t be granted.

In a declaration filed Wednesday, the principal at Canyon Crest Academy, part of the San Dieguito district, said Ratekin since April has sent him close to two dozen emails after being ordered, in March, not to seek discovery without court permission.

When the district’s superintendent and others are added, the emails totaled well over 100, said the principal, Brett Killeen.

But Killeen found one Ratekin fax especially worrisome: a “Mental Status Examination” report on Ratekin from the state of Washington Department of Social and Health Services.

It was concerning “to the extent that it reveals sensitive and private mental health information about Plaintiff,” Killeen said. “As it is unclear what the outcome of this examination was, as a recipient of unsolicited information it has made me feel uncomfortable [and] possibly threatened.”

Killeen added that the fax was an “attempt to intimidate me and others from giving testimony which Plaintiff may consider to be unfavorable.”

USD attorney Mushamel declined to comment after the hearing. Ratekin didn’t immediately respond to email and text requests for comment.

Appearing remotely from Washington state, the dark-haired Ratekin sported a light beard. (At a March hearing, the former UCSD water-polo star was clean-shaven.)

He repeated allegations that USD sent his private student records to the San Diego Unified School District and National University against FERPA privacy rules. (He’s awaiting a reply to FERPA about his complaint.)

This action, he said, “effectively defames me to the largest public education employer in the county. … That would be akin to USD putting out a memo to all law school graduates to not do business with someone practicing law in the county.”

Calling himself “categorically” defamed in the county, Ratekin said he was “very hard pressed” to find San Diego public-school employment.

“I can’t even get an interview despite my credentials,” said the nearly straight-A master’s degree holder from National University.

He also said he suffered “financial retaliation” thanks to release of his student records, arguing that the state Employment Development Department has disqualified him from any unemployment insurance.

In 2019, Ratekin was dismissed as a USD student teacher from Thrive Charter School, before the state shut it down. He says he was ousted for not emulating “teaching practices” at Thrive.

His requested subpoena of the state Education Department was meant to “ascertain the criteria for . . . closing Thrive Charter School on or about June 2019.” Thrive, he said, “didn’t have teaching practices a student teacher would want to emulate.”

In his original lawsuit, Ratekin alleged that he lost his student teaching jobs and place in the USD teacher-education program because of staff critical of his supporting Donald Trump.

None of that was mentioned Thursday.

“As a Christian and as a Protestant,” said Ratekin, acting as his own attorney, “I expected [to be] going to a Catholic university for its Catholic values … and Thrive Charter had students reading (‘The Autobiography of) Malcolm X’ and specifically passages that refer to Christianity as white devil ideology. Going to a private school that is Catholic did not meet my expectation at all for a private university.”