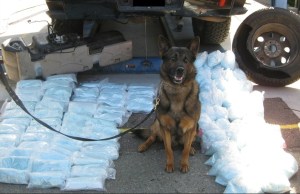 Border Patrol Agents assigned to the Campo Border Patrol Station found over 200 pounds of fentanyl inside of a 2015 Black GMC truck thanks to K-9 Aldaco. Credit: U.S. Customs and Border Protection

The federal officers pulled over the driver on eastbound Interstate 8 near Golden Acorn Casino in the Campo area about 3 a.m., according to USBP public affairs.

During the traffic stop, a service dog alerted the personnel to the possible presence of contraband in the man’s black 2015 GMC pickup truck, and a search of the vehicle turned up suspicious bundles concealed in a spare tire and the gas tank.

Inside the packages was a combined total of about 250 pounds of pills that tested positive for fentanyl — a drug haul that would have had an estimated street value of roughly $3.7 million.

The motorist, a U.S. citizen whose name was not released, and the narcotics were turned over to the U.S. Drug Enforcement Administration. The vehicle was seized by the Border Patrol.