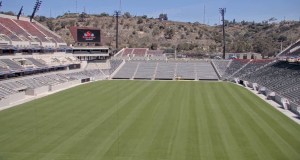 Progress at the Snapdragon Stadium site as of Friday, via webcam. Photo credit: Screen shot, snapdragonstadium.com/

San Diego State has entered into a five-year agreement with Kaiser Permanente, which will become a founding partner of Snapdragon Stadium at SDSU Mission Valley.

A key component of the new partnership is the naming rights to Kaiser Permanente Thrive Park. The park will be an area of grass fields to the west of the stadium that will serve the region on game days and also allow for recreation and community events throughout the year.

In addition, the agreement will include branding on the northeast gate, the student entrance, along with signage and branding opportunities in connection with three parent lounges inside the facility.

“This partnership will allow us to continue building on community initiatives that our two organizations have invested in over the years and allow us to create additional opportunities to better serve the San Diego community,” John David Wicker, SDSU’s athletic director, said.

Jane Finley, a senior vice president with the health care organization, also noted that the pact “allows Kaiser Permanente to help San Diegans thrive, by supporting the myriad of activities that will take place in and around Snapdragon Stadium year-round.”

Kaiser joins Qualcomm, the Sycuan Band of the Kumeyaay Nation as well as Sycuan Casino Resort, and San Diego County Toyota Dealers as founding partners of the new 35,000-seat stadium.

SDSU Athletics was represented by Legends and JMI Sports, which sourced and negotiated the partnership.

Snapdragon Stadium is on schedule to be completed by Sept. 3, when the Aztecs open the football season against the Arizona Wildcats. Season tickets for SDSU’s inaugural campaign at Snapdragon are on sale.