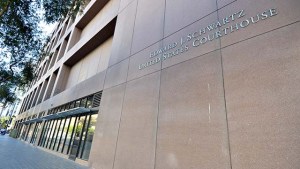 Ramsey Manuel Cervantes, 22, is accused of kidnapping the victim, 16, at knifepoint from her home last week, restraining her with duct tape and driving her across state lines to San Diego.

Prosecutors allege he kept her locked in his bedroom for four days before she was able to use Cervantes’ cell phone on Wednesday to call her father and police.

Cervantes drove to Oklahoma several times over a period of six months to meet in person, but prosecutors allege he displayed an abusive streak, leading to a two-month period of little to no contact with the girl.

However, the pair “reconnected” about a week ago prompting Cervantes to drive to Oklahoma on June 15.

When the girl got into his vehicle and was told he was taking her back to San Diego, prosecutors said she tried to get out, but Cervantes allegedly held a knife and threatened to kill her if she tried to leave.

On the way to San Diego, Cervantes allegedly sexually assaulted the girl repeatedly and forced her to drink vodka throughout the trip to keep her “in a constant state of heavy intoxication.”

According to an FBI agent’s declaration filed in court, Cervantes kept her in his bedroom and only allowed her out when his roommate was not home. Otherwise, he allegedly kept her mouth taped and had music turned up loud to conceal the girl’s presence, the declaration states.

When he left the home on Wednesday, police and prosecutors allege he accidentally left his cell phone, which allowed the girl to call for help. Officers responded and found her inside the residence. They arrested Cervantes at another location, the declaration states.

“We are grateful that this case had a positive ending with the young victim back with her loved ones,” said San Diego Police Chief David Nisleit. “This is a sad reminder to all of us to be careful who you trust online.”