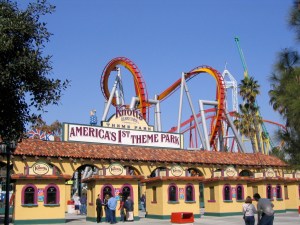 The entrance of Knott’s Berry Farm in Buena Park. Photo via Wikimedia.org

Knott’s Berry Farm officials Tuesday announced the expansion of their policy regarding chaperones for youths in light of a recent brawl among teenagers at the theme park.

Previously, the theme park required all guests 17 and younger to be accompanied by a 21-or-older chaperone on Fridays and Saturdays, but now the theme park is requiring it on Sundays and may add other days of the week if necessary.

“The safety of our guests and associates has always been our top priority at Knott’s Berry Farm,” officials said in a statement. “We are committed to keeping Knott’s Berry Farm a place where families and friends come together to enjoy a one-of-a-kind park full of homegrown experiences and immersive entertainment.”

The new policy was “well received” by its guests last weekend, officials said.

The chaperones must prove their age and accompany up to four guests 17 and younger per day.

The chaperones must stay with the group throughout the visit and be available by phone.

Youths in the theme park without a chaperone may be kicked out.

The policy follows an outbreak of violence among unruly teens about 7:30 p.m. July 16. Police said they initially responded to the park on reports of shots possibly being fired, but investigators determined no gunfire had occurred.

The disturbance was attributed by the park to “unruly behavior and altercations involving a number of teenagers.”

Video circulated on social media showed a melee of brawling teens that sent many park visitors scrambling for safety. Two people were taken to hospitals for treatment.

The disturbance prompted the park to close three hours early.