Knowing The ‘Stingray Shuffle’ Can Save Your Summer Beach Fun 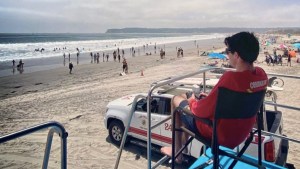 California’s sunny weather, gorgeous beaches and cool waters make it a virtual playground for summer fun-seekers. But enjoying the coast isn’t without risks. From stingray encounters to jellyfish stings, knowing what to do in case of emergency could save your summer.

According to California State University Long Beach’s Shark Lab, most stingray injuries occur between June and August. The afternoons are prime stingray striking times, when the tide is lower, the water is warmer and more people are visiting the beach.

Often hiding on the ocean floor, stingrays are difficult to see and can deliver a painful sting when they feel threatened, usually by people walking through their territory. A stingray will whip its tail to defend itself and can cause a laceration on whatever it encounters — usually peoples’ feet, ankles or legs.

How to Avoid Stingrays

This is why, when walking in the ocean, you should use the “stingray shuffle.” Drag your feet through the sand to warn the stingray you’re coming and give it time to swim away.

If you — or another beachgoer — are stung at a location where lifeguards are stationed, tell them right away. Stingray wounds should be soaked in hot water for 30 to 40 minutes to neutralize the toxin.

You can try to remove the stinger, but if it’s too deeply embedded, a trip to the ER may be required for removal. Make sure to keep the wound clean and watch for signs of infection as it heals.

Do’s and Don’ts When Jellyfish Attack

The outlook is a little brighter when it comes to jellyfish. In general, California doesn’t have venomous jellyfish, so very few jellyfish stings require a trip to the ER.

Typically, jellyfish stings occur when people rub up against them in the ocean or touch them once they’ve washed up on the beach. While most jellyfish stings are painful, they are not life-threatening.

Stingers, called nematocysts, look like small capsules and attach to the skin, injecting a small amount of toxin. Pain and a red streaking line will occur at the site of the sting.

It’s necessary to remove the stingers one at a time to stop further release of the toxin. Using tweezers or a flat surface, such as a credit card, to flick them off is best. Avoid using your bare hands, if possible.

Meat tenderizer and alcohol are also not helpful and can cause more toxin release. If the pain isn’t relieved after soaking and removing the stingers, you can take an over-the-counter pain reliever, such as ibuprofen, for relief.

Talk with your doctor if you are concerned about a recent stingray wound or jellyfish sting. And seek care if blisters form; signs of infection are present; or severe itching, redness or rash last more than 48 hours.