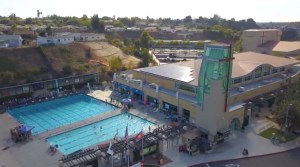 The Salvation Army Kroc Center in Rolando this weekend marks 20 years of providing recreation and arts to the community with an all-day celebration and an anniversary event.

Saturday’s commemoration includes an Ice and Pool Party, with ice skating and swimming, and a “Dive-In Movie,” 2002’s Lilo and Stitch, to follow.

2002 – when the Kroc Center opened – is a theme of the day. Members can join in for free, but the day includes $5 throwback pricing for Kroc Passes for the individual portions of the celebration. In addition, there will be exclusive 20th anniversary Kroc merchandise and Mission Brew will offer shaved ice.

The skating party starts at 1 p.m., and the pool party at 2:30 p.m. Register online for tickets.

On Sunday, the center hosts a 12:30 p.m. ceremony in Joan B. Kroc Theatre, hosted by veteran news anchor Sandra Maas, now a museum executive, with keynote speaker Alex Montoya, an author and advocate for those with disabilities. Call 619-269-1412 to RSVP.

Located on 12 acres, the 132,000 square-foot Kroc Center includes a variety of activities, from the aquatic center, recreation field and theater to a family resource center, education labs and pre-school.

It’s one of many community centers built around the country thanks to Joan Kroc, the late widow of McDonald’s founder Ray Kroc. Upon her death, the Salvation Army received a $1.6 billion donation from her estate.

The Rancho Santa Fe resident specifically had directed that half of the donation be set aside to build and operate community centers for recreation and education.

According to the Salvation Army, Rolando’s Kroc Center became the prototype for other such centers in the late ’90s following Mrs. Kroc’s $92-million donation to the charity to build a community center in San Diego. By 2015, 26 of the centers had been built, including sites in Phoenix and Philadelphia.