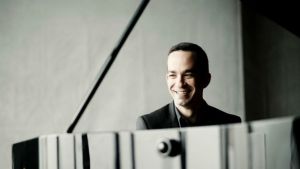 The La Jolla Music Society has agreed to a new contract with Music Director Inon Barnatan, a pact that will keep him in San Diego through September 2025.

Barnatan, an acclaimed concert pianist, has directed the society’s SummerFest event since 2019, creating the theme and programming for the festival and selecting the artists who will perform.

“There is no one better to lead SummerFest into the next phase of its evolution as one of the best chamber music festivals in the U.S., let alone the world,” said the society’s Artistic Director Leah Rosenthal.

SummerFest 2022 was the biggest in the company’s history. The event expanded to 20 concerts over four weeks with more than 70 free education and community engagement options.

Todd Schultz, President and CEO of the music society, said that “with each season (Barnatan’s) curatorial skills develop and expand.” New plans for the organization focus on The Conrad, the society’s home, which opened three years ago.

“Inon’s contract extension lines up perfectly with the board’s recently developed strategic plan, which lays out goals for more extensive utilization of our new venue and a dedication to deeper service to the community,” Schultz said.

Barnatan’s responsibilities, as outlined in the three-year contract, include overseeing the committee that selects SummerFest Fellowship Artists annually from an international pool of applicants. He also participates in various SummerFest engagement events including coaching workshops and open rehearsals.

The pianist has served in multiple roles, from soloist to curator to collaborator. He has performed with many of the world’s foremost orchestras and conductors, and served as the inaugural Artist-in-Association of the New York Philharmonic for three seasons.

His resume includes performances with the Los Angeles Philharmonic at the Hollywood Bowl, multiple symphonies, including San Diego, as well as the London and Royal Stockholm Philharmonics.

The recipient of the Avery Fisher Career Grant and Lincoln Center’s Martin E. Segal Award, Barnatan is also a sought-after recitalist and chamber musician, having played solo recitals at prestigious venues such as Carnegie Hall, while touring with his frequent recital partner, cellist Alisa Weilerstein.

He is also a recording artist. The most recent addition to Barnatan’s discography is a two-volume set of Beethoven’s complete piano concertos, recorded with Alan Gilbert and the Academy of St. Martin in the Fields on Pentatone.

“It’s deeply gratifying to feel the audiences responding so enthusiastically and with such love to the work we have been putting on stage,” Barnatan said. “I can’t wait to see what the next three years bring.”

The 35th annual SummerFest will return to The Conrad in La Jolla in July and August 2023.