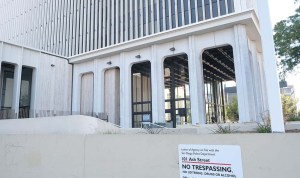 The mayor’s Ash Street proposal will roll hundreds of millions of city debt in future years requiring taxpayers to pay it off for up to as many as 30 years. The money will be illegally used to pay an unconstitutional debt.

City officials have squandered under Mayor Todd Gloria for 18 months in failing to come up with even a plan on how to use the Ash Street building that has remained unoccupied for five years; $23 million was wasted from the city budget for renting the uninhabitable building.

The mayor blames his predecessor, but it was the City Council which, on motions made by Todd Gloria, approved the Ash Street deal at committee and council in September and October 2016.

It is disappointing for the Times of San Diego to dismiss hard facts and law, and instead, embrace pure spin like Ash Street is a “sideshow” or the legal challenge is a “media stunt.”

The case is going to court in two months — on Sept. 22 — where the judge will hear a motion to decide whether the deal was constitutional. The trial is set in January, and the court next month will consider a request to advance that date to November. That is not “a long time.”

Hopefully, Times of San Diego will recover its mojo and get back into the game to hold the Ash Street scandal wrongdoers accountable for their wrongful conduct.