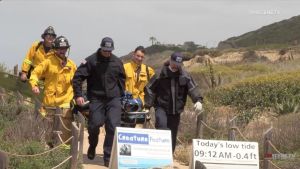 SDFRD firefighters and lifeguards, along with federal firefighters, U.S. Coast Guard and other local agencies respond to the incident near Cabrillo Monument in May 2021. Courtesy OnScene.TV

A man who piloted a boat that crashed near Point Loma during a human-smuggling operation, leading to the deaths of three people and injuries to more than two dozen others, was sentenced Friday to 18 years in federal prison.

Hurtado was hospitalized along with 29 others after the 40-foot vessel he was steering capsized about 50 yards from the shore at around 10 a.m. Engine failure and rainy conditions led the vessel to eventually drift toward land, where it ran aground, sending the occupants into the water.

According to court documents, those aboard the boat said they paid between $15,000 and $18,000 to be smuggled into the United States from Mexico and identified Hurtado as the vessel’s captain.

Hurtado also pleaded guilty to a count of assault on a federal officer for striking a Border Patrol agent in the head with his knee after he was arrested.

Assistant U.S. Attorney C. Seth Askins said Hurtado made a number of decisions that increased the risk to the boat’s occupants, including piloting the vessel during stormy weather in a bid to avoid detection by authorities.

The prosecutor said Hurtado also used drugs during the journey, which caused him to lose consciousness while at the wheel. Prosecutors say the passengers had to wake him up after the boat traveled aimlessly in circles for more than an hour.

When the engine died, Askins said Hurtado did not call authorities for help despite some of the illegal aliens begging him to do so.

When the boat capsized, the prosecutor said Hurtado was the first to jump into the water, leaving the victims behind.

“When those people needed him the most, he abandoned them,” Askins told the judge.

The prosecutor also alleged that Hurtado’s assault on the Border Patrol agent was committed with “no logical explanation” as had no chance of escape from the Border Patrol station where he was being cuffed. Askins alleged Hurtado did it “out of spite because he was mad that he got caught.”

Hurtado made a statement to the court, in which he said he was “deeply sorry” to the families of those who lost their lives. Hurtado said he knew the pain of having a family member die due to losing his brother.

“If I could give my life for theirs, I would, but that’s not possible,” Hurtado said.