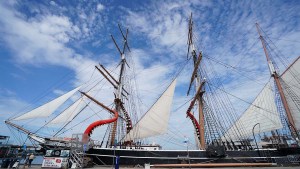 The Maritime Museum of San Diego has received $5 million from the state for the second phase of the attraction’s redevelopment project.

Aside from operating the museum, the organization restores, maintains and operates historic vessels on the downtown waterfront including the world’s oldest active sailing ship, Star of India.

The planned work includes reconfiguring the waterside docks for the protection of the fleet and improving mooring arrangements for the ships while adding workspace for their maintenance. The funding was included in the California state budget, signed by Gov. Gavin Newsom in June.

Tucker-Sadler, a San Diego architectural firm with credits that include other waterfront projects such the Portside Pier, has created the plans for the site.

The non-profit museum is a tenant of the Port of San Diego, which retains ownership of the coming improvements in trust for taxpayers through the State Lands Commission.

“This project is a multi-year process requiring coordination and support among several organizations,” said Dr. Raymond Ashley, president and CEO of the museum. “This step in financial support is crucial to bringing this vision to reality.”

The improvements are projected to contribute to growth along the Embarcadero, while producing at least $15 million in regional economic benefits due to additional hotel room nights and restaurant patronage by museum supporters.

Approximately 75% of the museum attendees are out-of-town visitors.