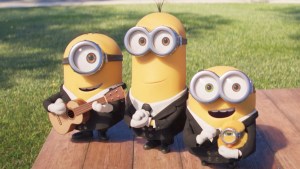 “Minions: The Rise of Gru” set a record for the highest-grossing movie opening for a Fourth of July weekend. Photo via @UniversalPics Twitter

“Minions: The Rise of Gru” has set a record for the highest-grossing movie opening for a Fourth of July weekend, hauling in $125.1 million Friday through Monday at North American theaters, according to industry estimates released Monday.

Universal’s animated film, the latest installment in the “Despicable Me” franchise, surpassed the $115.9 million made over the four-day holiday weekend in 2011 by “Transformers: Dark of the Moon.”

“Top Gun: Maverick” continued its amazing run, pulling in another $33 million in its sixth week in theaters in the United States and Canada for a cumulative domestic total of $571 million, Comscore reported.

“Elvis” was third with $23.5 million in its second week in theaters.

“Jurassic World Dominion” took fourth place with $19.7 million in its fourth week, followed by “The Black Phone” with $14.4 million in its second week.