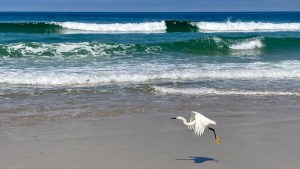 A snowy egret drops by for a shoreline snack at Harbor Beach in Oceanside. Photo via @CityofOceanside Twitter

A ridge of high pressure was predicted to dominate Sunday’s weather in San Diego County, continuing seasonably hot conditions inland with mild conditions near the coast because of the marine layer, the National Weather Service said.

Monsoonal moisture was expected to increase on Wednesday, leading to a slight chance of afternoon thunderstorms over the mountains, a condition that will continue through Friday, the NWS said.

If you think it's hot in the desert these days, you'd be right. But check out the extreme heat that happened in the desert on this day in history. July 10 seems to be a banner day for all time hot weather in the desert, and on the planet! pic.twitter.com/lRmjq0cTQi

Warming was forecast west of the mountains later in the week.