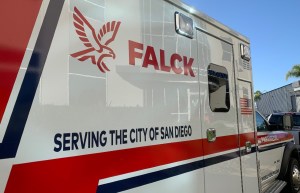 A Falck ambulance for San Diego. Courtesy of the company

A motorcycle rider was in a life-threatening condition Monday after being clipped by a truck in Kearny Mesa.

A 53-year-old man in a Penske truck was driving in the middle lane near the 27-year-old victim on a Suzuki GSxR in the right lane of the 9000 block of Clairemont Mesa Boulevard around 11 p.m. Sunday, according to the San Diego Police Department.

The truck driver made a right turn in front of the motorcycle, striking the rider on his right side, police said.

The victim was taken to a hospital with serious injuries to his lungs and back.

“He lost all feeling to his legs and had no blood flow below the waist,” said Officer John Buttle.

SDPD was investigating the accident, and reported that alcohol was not a factor.