Motorcyclist Killed in Collision with Flatbed Truck in Otay Mesa 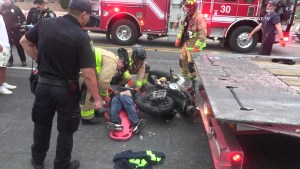 A motorcyclist was killed Monday in a collision with a flatbed truck at an Otay Mesa intersection, authorities reported.

The fatal crash occurred about 6:15 a.m. at Coronado Avenue and 25th Street, just east of Interstate 5, according to the San Diego Police Department.

The motorcyclist, whose identity was not immediately available, was pronounced dead at UCSD Medical Center.

The accident forced closures of traffic lanes in the immediate area until about 9 a.m., SDPD spokesman Scott Lockwood said.