Musgrove K’s 10, But It’s Not Enough for Padres Who Fall to Dodgers 3-1 in NL West Clash 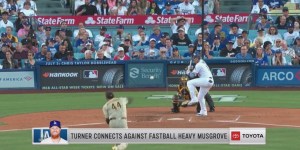 The Padres had the man they wanted on the mound to open up their big four-game series Thursday against the Los Angeles Dodgers.

The team gave Joe Musgrove the ball for the first-place showdown at Dodger Stadium – the Padres trailed the Dodgers in the National West by 1.5 games entering play – in an apparent mismatch.

Musgrove (8-1) has excelled this season, while the Dodgers turned to Mitch White (1-1), a right-hander who has shuttled back and forth between L.A. and Triple-A.

Yet the game turned into a pitching duel that extended to the seventh inning when Justin Turner broke a 1-1 tie with his second homer of the game, a two-run shot, off Musgrove.

The homers held up, as the Dodgers beat the Padres 3-1.

The Friars threatened in the eighth, but reliever Alex Vesia, after walking Luke Voit, pitched himself out of a two-on, two-out jam, by inducing Austin Nola to ground out to Turner at third.

Dodgers closer Craig Kimbrel logged his 14th save in a 1-2-3 ninth that ended with C.J. Abrams striking out looking.

Musgrove was no slouch, striking out 10 in a seven-inning outing, but it wasn’t enough. “Felt like it was two pitches that hurt us,” he said.

On the upside, Manny Machado, serving at the DH, made his return from spraining his ankle June 19. He had an immediate impact (ultimately he would go 1-for-4 with three strikeouts) doubling in the first and scoring on a Nomar Mazara single.

But the Padres lost a chance to pad that 1-0 lead. After loading the bases in the second, Jurickson Profar sent a line drive to right, and Dodger Chris Taylor turned the out into a double play, nailing Trent Grisham at the plate to end the threat.

As far as momentum swings go, said manager Bob Melvin, “that was one of them.”

With the loss, the Padres have dropped seven straight at Dodger Stadium. They will try to end the streak Friday when Blake Snell heads to the mound. The pitching matchups for the remainder of the series (with Saturday perhaps offering the marquee pairing with Yu Darvish, a former Dodger):