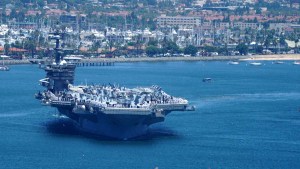 Navy Region Southwest Federal firefighters responded to the scene in Coronado and made the determination about the sailor, said Lt. Cmdr. Christina Gibson, public affairs officer for the carrier.

“The Navy is investigating the circumstances of the death and there are no indications of suicide or foul play,” Gibson said.

“In accordance with Department of Defense policy, the identity of the sailor will not be released until 24 hours after the primary next of kin have been notified,” Gibson added.

The Navy has been investigating a rash of deaths among sailors working on another aircraft carrier, the USS George Washington.

There have been seven deaths in the last year among nearly 3,000 sailors working aboard the warship as it is being overhauled at a shipyard in Virginia. Five of those deaths were apparent suicides.