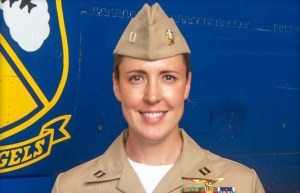 Lt. Amanda Lee is one of six new core members selected for the team, founded 76 years ago, the Navy said. It said women from the Navy and Marine Corps have served with the Blue Angels for 55 years, but never before as a pilot.

The Blue Angels were created in 1946 to generate public support and boost Navy morale by performing aerial moves at air shows, sporting events and other flight demonstrations.

Lee, of Mounds View, Minnesota, is currently assigned to the Strike Fighter Squadron 106 demonstration team, known as the Gladiators, stationed at Naval Air Station Oceana in Virginia Beach, Virginia. She and the other new members will report to the Blue Angels in September.

After the current season concludes in the winter, the members will undergo five months of training at Naval Air Facility El Centro before starting the 2023 show season.

There are 17 officers currently on the Blue Angels. They typically serve two years with the team.

“The mission of the Blue Angels is to showcase the teamwork and professionalism of the United States Navy and Marine Corps through flight demonstrations and community outreach while inspiring a culture of excellence and service to country,” the Navy wrote in a statement.