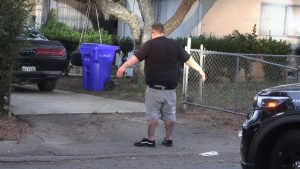 A man was arrested early Monday after allegedly firing a weapon into a neighbor’s home in Lemon Grove, a county sheriff’s department official said.

Richard Churchill, 37 of Lemon Grove, was booked into the San Diego Central Jail on suspicion of negligent discharge of a firearm and child endangerment, according to the Sheriff’s Department. According to the county jail website, Churchill is no longer in custody.

Lt. David Collins said the shooting appears to be accidental, and there were no injuries.

Shortly after 4 a.m., in the 8200 block of Mount Vernon Street, residents reported hearing gunshots, according to the sheriff’s department.

Deputies found that shots were fired through a neighbor’s window and wall, Collins said. They went to the suspect’s home and used a P.A. system to contact him. Not long afterward, the suspect came out.

Collins said Churchill was charged with child endangerment because there were children in both homes at the time of the incident.