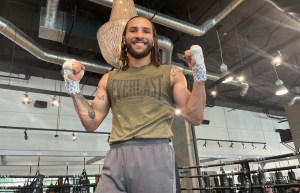 Boxing great Muhammad Ali’s shocking loss to Ken Norton in 1973 is pictured on the wall among the notable historic events at Pechanga Arena San Diego.

On Aug. 20, Ali’s 22-year-old grandson and unbeaten middleweight prospect, Nico Ali Walsh, will step into the ring at the same venue to “break the curse” in his sixth professional fight.

“It’s a special place, it’s an honor to be fighting where there’s so much history,” said Ali Walsh at The BXING Club in East Village during his first visit to San Diego on Monday to help promote the upcoming fight card organized by Top Rank Boxing.

Joining Ali Walsh were WBO World Featherweight champion Emanuel “Vaquero” Navarrete of Mexico City, and undefeated welterweight contender and San Diego native Giovani Santillan. Navarrete and Santillan return to Pechanga Arena after wins in front of a boisterous crowd with fans from both sides of the border on Oct. 15 last year.

“I wish my first fight was in San Diego, but I’m glad I’m here now,” said a smiling Ali Walsh. “The timing is perfect because my grandfather fought in the same arena I’m fighting in. He got his jaw broke. I’m coming into the rematch against the guy who gave me my hardest fight.”

“I’m going there to break the curse of my grandfather getting his jaw broke and go in there to do way better than the first time I fought this guy,” he vowed.

Ali Walsh, who has five wins with four knockouts, faces Reyes Sanchez, a native of Los Angeles who lost for the first time to Ali Walsh.

Ali Walsh noted the possibility of fans coming to see him who may have also been in attendance at his grandfather’s defeat by Norton, or who watched live on ABC’s “Wide World of Sports.

“It’s not that long ago. Thinking about it, it’s very possible. We’re recreating history, so it’s awesome,” the young boxer said.

Ali Walsh’s undeniable lineage draws an unusual amount of attention to the aspiring prospect, who recently graduated from the University of Nevada Las Vegas with a bachelor’s degree in business. He was close to the man he called “Poppy,” who gave him his blessing to purse the sport that made him famous worldwide.

It also burdens him with great expectations, but the younger man relishes his opportunity and shoulders the role with grace and enthusiasm.

“I’m young, I’ve just turned 22 years old. I’m fresh out of college. People my age want to support I think. People who are older than me who watched my grandfather want to support as well,” Ali Walsh said.

“I’m that bridge between people my age and people who are 60 or 70 who are watching my fights because of my grandfather,” he said.