‘One of Those Days’: Kansas City Hands S.D. Wave its 1st Home Defeat by a Goal 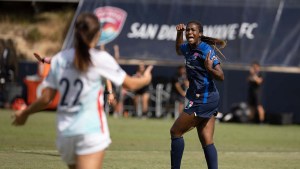 In its first regular season home loss, the San Diego Wave Fútbol Club was dominated by an energetic, aggressive Kansas City Current team in a 2-1 defeat Sunday at Torero Stadium.

Twelve minutes after entering the match, San Diego forward Amirah Ali scored her first goal in the NWSL regular season in the 88th minute to deny a clean sheet for Kansas City. She was assisted by Makenzy Doniak.

“That’s nice to have under my belt,” Ai said after the match, “but it would have been nice to get the result we wanted as well.”

Wave Head Coach Casey Stoney said: “I am massively proud of Amirah…. She is working very hard. She is one of our top workers.”

Kansas City (6-4-4) pulled ahead in the 27th minute with a CeCe Kizer goal, assisted by Kristen Hamilton,off a fast break. Kailen Sheridan attempted a save, but it was deflected into the net, bringing the score to 0-1.

In the 39th minute, Hailie Mace helped the Current double its score with a long shot to the top right corner of the net.

In second-half action, Kansas City earned a penalty kick in the 67th minute, but Sheridan gave the crowd something to cheer about as she recorded her eighth NWSL career penalty kick save and second in back-to-back games.

Conditions were hot on the field with a temperature of 88 degrees and uncomfortable humidity at the start of the match.

Stoney gave an assessment of Sunday’s match: “I’m not often disappointed, but I am today. The manner of our performance wasn’t good enough.”

Calling it “one of those days,” the coach said she didn’t think it was a deep rooted problem. Rather, the team has to improve ball control and defense.

Wave closes out three consecutive games at Torero Stadium on Saturday, August 20, against the Houston Dash for Hispanic Heritage Night presented by Televisa — Channel 12 and benefitting the Chicano Federation.

“The next two games are massive,” Stoney said as her clubs looks toward the playoffs.

With only two matches left at Torero Stadium, San Diego Wave FC looks forward to its home opener at the new Snapdragon Stadium on Saturday, September 17.

San Diego hopes to break the NWSL attendance record in the 32,000-seat stadium as they take on Southern California-rival Angel City FC at 7 p.m.​​ Tickets for Snapdragon Stadium and all of Wave FC’s remaining home matches at Torero Stadium can be found here.

The Wave is in second place behind the Portland Thorns (6-7-1).