Opinion: 2 Earthquakes Within Hours Are a Wakeup Call for San Diego Residents 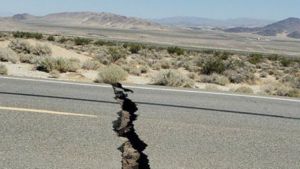 Damage from a 6.4-magnitude quake near Trona on July 4, 2019. Courtesy Caltrans

San Diego County was bookended by two earthquakes just hours apart on Wednesday morning. They weren’t big — both under magnitude 4 — but should serve as a wakeup call for preparedness.

A 3.6-magnitude quake struck in the Pacific Ocean south of Navy-administered San Clemente Island at 3:28 a.m. followed by a 3.3-magnitude temblor north of Borrego Springs at 9:01 a.m.

Those of us lucky enough to live in America’s Finest City and surrounding communities don’t think much about earthquakes, leaving those concerns to residents of Los Angeles and San Francisco.

But our county is crisscrossed by major faults, including the Rose Canyon Fault beneath downtown San Diego and along the coast, and the Elsinore and San Jacinto faults in East County.

The legendary San Andreas Fault to the north can cause strong local shaking, but geologists say Rose Canyon is the most dangerous here. It’s capable of generating earthquakes of magnitude 6.5 to 6.8.

That’s not necessarily “the big one,” but more than enough to cause major damage in densely populated parts of the county.

So what should you do in San Diego? Here are five things:

Science can’t yet accurately predict earthquakes, and they can strike at any time, but at least we can take some simple precautions.

Hopefully the next time two quakes hit on the same day they’ll be equally small. But if not, at least we can be better prepared.

Chris Jennewein is editor and publisher of Times of San Diego.