Opinion: As Gun Rights Triumph, What About Victims Caught in the Crossfire? 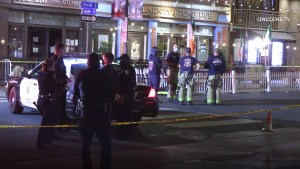 Police and paramedics at the scene of a shooting in the Gaslamp that left one person dead and four others wounded. in 2021 Courtesy OnScene.TV

Last Friday night, just hours after Atty. Gen. Rob Bonta told California law agencies that “good cause” is no longer required to carry a concealed handgun, two women were wounded in the crossfire of rival groups arguing in the Gaslamp.

It’s unlikely that these innocent victims were carrying concealed weapons. But even if they were, it’s not likely they would have known to pull their weapons in self-defense.

Their fates will likely become increasingly common throughout California as more and more people carry concealed weapons thanks to the U.S Supreme Court’s decision throwing out a century-old New York law.

Gun advocates are cheering and calling for more people to carry weapons.

“We certainly hope that millions of people will submit an application to their respective licensing authorities without delay,” said the Sacramento-based Firearms Policy Coalition.

“Removing arbitrary, subjective hurdles from the path for sane, trained, law-abiding gun owners to carry firearms outside the home for self defense will increase the number of people who can protect themselves from dangerous criminals,” said the San Diego County Gun Owners, a political action committee.

“Sane, trained, law-abiding” is well and good, but the firearms coalition is challenging the remaining “good moral character” requirement to carry a concealed weapon in California, calling that an arbitrary hurdle to packing a gun.

These developments are great for passionate gun owners, but for the vast majority of Americans, there will be a growing fear. How can we be sure that the millions more guns out there will be handled safely?

As we walk through crowds in a busy mall, will we wonder who is carrying a weapon? If we accidentally cut off a driver on the freeway, will he shoot? Is the angry looking guy in the corner of Starbucks armed? What if the people at that loud table in the back of the bar start shooting? Will we be caught in the crossfire? Do we have a right to safety outside the home?

This isn’t a far fetched concern. The firearms coalition mused last week in a website post whether the Supreme Court’s decision means “people can carry guns into stores, coffee shops, and other public businesses.” If this isn’t allowed, the group promised to be “actively litigating such restrictions.”

Of course, as more guns appear on California streets, businesses will hire more security and police will likely become more vigilant. Laws against assault with a deadly weapon, manslaughter and murder will still be enforced. But this may be cold comfort for new victims of gun violence.

Gun rights are triumphant in America now. Sadly the rights of gun victims come into effect only after the bullets hit.

Chris Jennewein is editor & publisher of Times of San Diego.