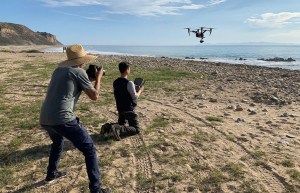 An Aerial MOB team using a drone in its filming work. Photo courtesy of the company

Carlsbad is far from Hollywood, but in our small city my business contributes to California’s bustling entertainment industry, which has a long history of employing many in Orange and San Diego counties.

Fortunately for us and many other small businesses, state legislators have been supportive in passing tax credit programs. But a critical incentive is set to expire in the less than three years.

Without the California Film & Television Tax Credit Program, our state could lose out on over $1 billion in overall production spending, undermining the economic impact that many small, local businesses like mine provide.

We urge lawmakers to take action now and ensure that California small businesses have the opportunities they need to succeed.

As the co-founder of Aerial MOB, an aerial drone cinematography company in Carlsbad, it is clear to me that the more local production there is, the more local businesses, including my own, thrive. The tax credit program has generated nearly $21.9 billion in statewide economic impact and created more than 110,000 well-paying jobs for Californians.

Beyond just the job opportunities on a film set, local production and post-production stimulates California’s economy by generating significant revenue for local businesses, including hotels, restaurants, hairdressers, laundromats and more.

Aerial MOB has helped produce the action sequences in productions such as Baby Driver, Transformers: Bumblebee, Venom: Let There be Carnage, Fast and the Furious: Hobbs and Shaw and more. Personally contributing to these productions underscored for me how closely the film industry is tied to stimulating local businesses across California, whether it be drone filming, technical assistance, or catering. With more production companies incentivized to shoot in California, local businesses reap the benefit through consistent revenue streams.

However, the very incentive that attracts more local production to the Golden State is under threat. Despite the immense local benefit that the tax incentive provides, the credit is set to expire in less than three years, which would be a devastating blow to California’s economy. A recent report found California lost nearly $8 billion in economic activity, 28,000 jobs and over $350 million in revenue to local vendors from film productions moving out of state.

A decade ago, I took a gamble on a new and emerging industry and helped develop the safety rules that allow drones to be used regularly on film and television production. My livelihood now depends on consistent local production.

It is critical that California lawmakers recognize the impact film and television production has on countless small businesses across the state. With the credit set to expire soon, production companies could choose to film in states with concrete incentives in place, leaving California to lose out on vital economic investments.

Tony Carmean is the Co-Founder of Aerial MOB, a drone filming production company in Carlsbad.