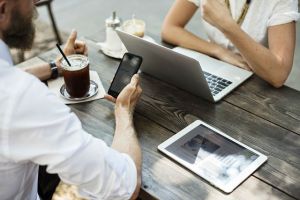 Internet users at a coffee shop. Photo via Pixabay

High speed Internet has become the 21st century’s version of the introduction of electricity or development of railroads, yet 15% of Californian households do not have access to high-speed internet and close to 6% are not connected at all.

Broadband connectivity is so fundamental to our lives and economic system that the thought of over 2 million Californians living without the Internet is illogical and outdated.

The communities that are suffering the most are those that are already struggling economically — predominantly minority, mostly Latino. The new Internet desert is not confined to any one area in our great state. It is everywhere from Imperial County to Los Angeles, from the Central Valley to the Oregon border.

Something must be done, and as we enter the end of the legislative session, it is imperative that our elected leaders take on this issue and provide solutions. A recent article from Calmatters suggests two causes afflict under-served neighborhoods: lack of infrastructure and inability to afford an internet connection.

The irony is that federal and state governments now have a surplus of funding to mitigate these problems. California and the federal government are allocating gobs of money — roughly $7.5 billion — to address the state’s digital divide.

So, how is it that California has this immense amount of funding to solve these problems but is not yet doing it?

However, the explicit exclusion of alternative wireless broadband solutions prevents countless innovative Internet providers from accessing this abundance of state and federal funding, and therefore delays our communities from getting critical Internet connections.

This isn’t the first time CPUC has limited alternative solutions to civil issues. I have personal experience with this. Forty-five years ago, my San Diego/Tijuana Tours applied for a permit to offer San Diego hotel visitors tours on my vans and buses, but CPUC policies prohibited any buses to operate where another company had existing tours. It took me three hearings and heavy legal fees to get the permit.

Regarding the CPUC’s wireline requirement, fiber is a necessary and incredibly important part of connecting Californians, but not for last-mile connections. Fiber is the fastest and most reliable technology on the market, but it’s also the most expensive and incredibly slow to deploy amid the chaos of torn-up streets.

After 20 years of deploying residential fiber, only 20% of American homes have such connections today. Fiber has a role, but it isn’t working for those residing in low-income and under-served areas.

Connecting the last mile for all Californians with fiber would be like building freeways and off-ramps to every single home; it’s just not logical. Wireless options promise flexibility, quick deployment and affordability.

That’s why Assemblymember Sharon Quirk-Silva has authored Assembly Bill 2749, legislation that currently awaits concurrence in the Assembly before going to Gov. Gavin Newsom to be signed into law. AB 2749 amends the existing Public Utilities Code to explicitly include wireless technologies to access some of the $2 billion federal dollars to be spent on broadband infrastructure. This inclusion will allow wireless providers to reach California’s under-served quickly and for a fraction of what fiber costs.

The money and technology are available, and AB 2749 can help deliver the Internet to our neighbors who need it just as much as the rest of us. The CPUC needs to understand that the success in closing the digital divide should not be predicated on the percentage of funding being used, but on the number of homes, families, and Californians that are being connected.