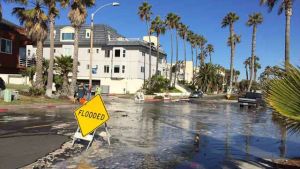 For decades, experts have debated the impact of energy consumption, along with other human activities, on the overall impact to the environment. Regardless of one’s view, as population increases, the veracity of weather events seemingly intensifies with every report.

Given this reality, it is important that we take a holistic approach to building resilient infrastructure — one that is well-coordinated and ensures communities around the country can withstand these catastrophic events.

Federal agencies have already been hard at work on this mission. They are leveraging federal funding and smart regulatory reviews to build or retrofit climate-prepared infrastructure. Just this past year, President Biden signed into law his signature bipartisan infrastructure law, which provides states and localities $47 billion in climate resiliency funding.

As this money gets distributed to communities in the years ahead, it will be the largest national investment in infrastructure resiliency ever — an overdue moment of bipartisan agreement in a particularly polarizing period in history. With the federal government taking a lead role, it will ensure frontline communities are prioritized and that those communities are coordinating with those around them.

Central to this coordination is my former agency, the U.S. Army Corps of Engineers. The Army Corps very often takes the lead in considering the impacts of infrastructure projects around the country. In recent years, it has been charged with integrating “climate change preparedness and resilience planning and actions in all activities.”

The corps will also be taking a larger role in preparing for climate change, as the aforementioned bipartisan infrastructure law delivers $17.1 billion for projects and studies, over four times the amount Congress gave the corps last year for construction. To this end, the corps notes that these investments will assist local communities to improve their resilience to better withstand significant weather events.

One of the most important aspects of this federal approach is that it helps ensure that projects of one jurisdiction don’t significantly impact neighboring communities, the environment, and even cultural sites. For example, if one community puts up sea walls to protect their own streets and homes, it could make things worse for the communities downstream, whose residents will now have to bear the brunt of addition flooding during bad storms. Water diverted from one area will find its path of least resistance.

But that “go it alone” approach is exactly what some municipalities are undertaking. They are suing American energy companies to try to make the companies pay for their infrastructure improvements, regardless of the justification or what their impact is to those around them. Roughly two dozen jurisdictions, like New York City, Charleston, SC, and Imperial Beach have filed these lawsuits.

This approach is flawed from at least two key angles. The first is funding. Making energy companies pay means that all of us are going to have to pay higher prices for gas and electricity. Lawsuits don’t generate free money.

The lawyers for some of the municipalities have openly said that their goal is to make everyone — including you and me — pay more for oil and gas in order to generate the money to fund these government programs. That’s not fair to the broader American community. Every community has mitigation needs.

Second, and more concerning to me as an engineer, is that this everyone-out-for-themselves approach could have significant unintended consequences. As indicated, if New York City won its case and made the companies build sea walls around Manhattan, the neighboring communities across the East River or Hudson River could very well feel the impact of increased flooding. That’s why we need a highly coordinated approach spearheaded by the federal government.

Thankfully, not one court has allowed these cases to succeed. The U.S. Court of Appeals for the Second Circuit, for example, threw out the New York City lawsuit. It said that this litigation defies economic reality and is asking state courts to do what Congress and federal agencies, like the Army Corps, is charged with doing. Besides, these proposals don’t really solve the problem. All these municipalities want is an endless piggy bank they can use — funded by the rest of us through higher energy prices.

Addressing and preparing for the impacts of climate change is important work and will take a great deal of cooperation between governments — at home and around the world. Using proven resources, like the non-partisan, unbiased, and science-based Army Corps of Engineers, we can meaningfully improve the resiliency of our infrastructure. We shouldn’t gamble our future on unproven, dangerous litigation that won’t address the need — especially when it could actually make things worse for many Americans.

Tom Magness, a retired Army colonel, formerly served as a commander in the U.S. Army Corps of Engineers