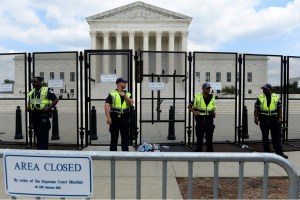 Police and fences guard the Supreme Court in Washington on the day of Roe v. Wade decision. REUTERS/Mary F. Calvert

Editor’s Note: This statement was prepared and signed by more than 45 leaders of the San Diego Jewish community.

Jewish tradition is grounded in obligation and responsibility to ourselves, one another, and our community. As Jewish communal professionals and clergy, we understand Jewish approaches to autonomy and community have long protected the rights of reproductive freedom and justice, as exemplified by cases where health, wellness, and life are at stake.

Jewish experience tells us that our reproductive freedoms are integrally bound to our religious liberty. At the core of the Jewish tradition is the affirmation of the sanctity of life. Further, the tradition recognizes that life does not begin at conception and the wellbeing (spiritual, emotional, and physical) of the parent takes precedence over an unborn fetus.

The Supreme Court’s decision to overturn Roe v. Wade not only undermines 50 years of legal precedent, but this ruling also stands squarely in the face of the foundational American principle of religious freedom, which affects everyone in the Jewish community. The decision negates decades of progress in the fight for women’s rights, and the recognition of women as whole and autonomous human beings.

The decision to overturn Roe v. Wade is deeply painful and distressing to millions, and will have an immediate, lasting, and irreversible impact for all women and those in need of reproductive care across the country. This ruling will exacerbate the reproductive restrictions and health outcome disparities that already disproportionately impact those in communities with less access to healthcare including low-income communities, communities of color, rural communities, immigrants, LGBTQ+, the disabled, and those who are being abused by partners or family members.

In the coming days, months, and years we will continue to fight and advocate for our Jewish values that maintain religious freedom, cherish life, dignity, and enshrine the individual’s rights to make their own reproductive choices according to their own conscience. May we find the redemptive strength and courage to restore that which has been stripped away.