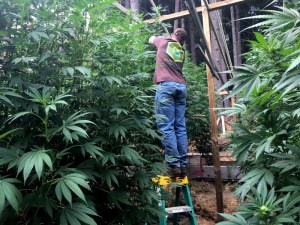 A cannabis grower tends to his plants on a farm in Humboldt County. File photo by REUTERS/Rory Carroll

Let’s start with the premise that taxation is largely arbitrary.

Despite efforts to frame tax policy in moral or at least philosophical terms, what or who is taxed and the form and level of that taxation merely reflect current political priorities.

Take, for example, South Lake Tahoe, a small city that sits on California’s border with Nevada. If you live in that city, you pay the nation’s highest state income taxes. However, if your home is located a few feet to the east, inside Douglas County, Nevada, you pay no state income taxes.

That explains why there’s a steady rivulet of high-income Californians resettling in Nevada, or at least changing their official addresses. If a couple of pending California ballot measures are approved in November, state taxes on the wealthy will increase even more and Nevada will become an even more popular tax refuge.

California’s income taxes became the nation’s highest through a series of incremental decisions made by legislators or voters and they now provide more than two-thirds of the state’s general fund revenue. Nevada, on the other hand, makes do without taxing incomes.

So which state is correct? Neither. They just happened to take different taxation paths for different reasons.

The arbitrary nature of taxation is evident, too, within the California revenue system, particularly in sales taxes.

One oddity is that cold food is not subject to taxation but hot food is and the differential can be very difficult to sort out. Some years ago, a movie theater chain asked the state Board of Equalization to shift popcorn from being a taxable hot food to a tax-free cold food. The rationale was that by the time theater patrons returned to their seats with popcorn in hand, it had turned cold. The board agreed.

If someone buys computer software, such as TurboTax, in a store to file federal and state income tax returns, that purchase is subject to a sales tax. But if a large company obtains a custom computer program to prepare its tax returns, the purchase is free of sales taxes. Why? Because those who sell custom software lobbied the Legislature for an exemption in the 1980s.

The Legislature, at the behest of Gov. Gavin Newsom, has enacted a new and especially questionable tax anomaly.

One budget trailer bill imposed a hefty new tax on the embryonic industry of extracting lithium from the brine of the Salton Sea in the Southern California desert.

Lithium is the key ingredient of long-life, rechargeable batteries used in everything from cellphones to electric cars and immense electrical energy storage banks and therefore plays a key role in the state’s drive to make itself carbon-free.

Most lithium is imported from other countries, including China. The Salton Sea, however, is a potentially huge source of the mineral that, if developed, would both contribute to energy independence and create many new jobs in an economically depressed corner of the state.

Lithium companies warned that taxing extraction, at $400 to $800 per metric ton, would make California lithium more expensive than imports and discourage investment in the industry, but were ignored.

Another trailer bill, however, gave sellers of legal marijuana a hefty cut in taxes, responding to their complaints that taxation makes their product too expensive vis-à-vis pot from illegal growers and sellers.

So California politicians may be strangling an industry vital to their vision of a carbon-free future while encouraging — in essence, subsidizing — an industry that helps people get stoned.

That’s about as arbitrary as it can get.