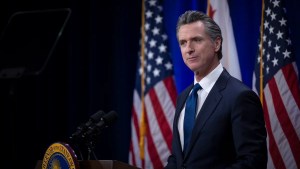 Gov. Gavin Newsom gives his State of the State address in Sacramento on March 8. Photo by Miguel Gutierrez Jr. / CalMatters

Gov. Gavin Newsom dropped the strongest hint yet that he may be thinking about a presidential candidacy Monday when he vetoed a bill that would have allowed cities to set up sites where addicts could ingest drugs.

National political media had been waiting for Newsom’s action, reasoning that if he rejected a bill supported by progressives in his Democratic Party, it would indicate that he was worried that signing it would alienate moderate voters in other states.

Newsom has consistently denied harboring presidential ambitions but has drawn national media attention with his sharp attacks on red state governors and his entreaties that Democrats mount a stiffer defense in the face of conservative political and judicial gains.

“I feel like Gavin Newsom is the most and least likely governor in America to sign this bill — most likely in the sense that he likes to be ahead of the curve. But if he signs this, the ads kind of write themselves: He becomes ‘Governor Heroin.’”

The legislation Newsom rejected, Senate Bill 57, was carried by Sen. Scott Wiener, a San Francisco Democrat, and had cleared both houses of the Legislature, albeit narrowly, with only Democratic support.

Newsom’s predecessor, Jerry Brown, had vetoed a similar bill, saying it sent the wrong message about drug abuse, but during his 2018 campaign for governor, Newsom indicated that he was open to the idea. On Monday, he didn’t denounce it as strongly as Brown had done, but expressed concerns about its workability and “unintended consequences.”

“I have long supported the cutting edge of harm reduction strategies,” Newsom said in his veto message. “However, I am acutely concerned about the operations of safe injection sites without strong, engaged local leadership and well-documented, vetted, and thoughtful operational and sustainability plans.”

“The unlimited number of safe injection sites that this bill would authorize — facilities which could exist well into the later part of this decade — could induce a world of unintended consequences. It is possible that these sites would help improve the safety and health of our urban areas, but if done without a strong plan, they could work against this purpose. These unintended consequences in cities like Los Angeles, San Francisco, and Oakland cannot be taken lightly. Worsening drug consumption challenges in these areas is not a risk we can take.”

Newsom said his administration would convene meetings with local officials to discuss “minimum standards and best practices for safe and sustainable overdose prevention programs” and “a truly limited pilot program.”

Wiener, in a statement, said Newsom’s veto “sends a powerful negative message that California is not committed to harm reduction” and added, “We don’t need additional studies or working groups to determine whether safe consumption sites are effective. We know from decades of experience and numerous peer-reviewed scientific studies that they work.”

Despite Newsom’s denials of presidential ambition, his name has popped up with increasing frequency on media lists of potential candidates should President Joe Biden decide not to pursue a second term in 2024. Polls have indicated that most Democrats would prefer that Biden, who suffers from high disapproval rates in voter polls, not run again.

Just last week, a new poll was released by the UC-Berkeley Institute of Governmental Studies, reporting that 61% of California voters don’t want Biden to run again, including 46% of Democrats. The same poll also indicated that Newsom ranks high as a replacement candidate.