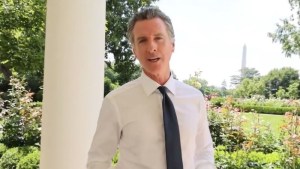 Gov. Gavin Newsom at the White House with the Washington Monument in the background. Image from Governor’s Office video

Gov. Gavin Newsom spent three days in Washington last week expanding his profile as a national political figure while insisting he has no interest in running for president.

Newsom’s press office trumpeted his visit with daily bulletins listing his contacts with various political figures, the first of which declared that “California was on the national stage…”

The ostensible purpose of Newsom’s trip was to accept an award for supporting public education in California — although in fact California’s students have only mediocre scores on national academic tests.

He used his acceptance speech to continue his rhetorical attacks on Republicans, particularly Florida Gov. Ron DeSantis, who is widely seen as a potential GOP presidential candidate.

“I do believe education is under assault in ways that I’ve never experienced in my lifetime,” Newsom said. “But what’s happening now — banning books, suppressing speech, the othering of our students, teachers, parents — it’s alarming. And so I came here not just to acknowledge and be recognized as a state that’s committed to righting wrongs and advancing the cause of reform and innovation but I’d be remiss if I didn’t speak more deeply to the moment that I think we’re living in as it relates to the assault on our freedom.”

Newsom has criticized his own party for being too passive in its battles with Republicans at the state and federal levels, leading to media speculation that he is laying the groundwork for a presidential campaign either in 2024 or 2028.

At one point, Newsom told reporters that his only ambition is “to express the frantic frustration, anger and despair a lot of folks are feeling about what’s happening in this country in real time. And it transcends the administration. But we have to have the administration’s back.”

By happenstance or otherwise, Newsom’s Washington trip, including visits to the White House, coincided with President Joe Biden’s absence during a diplomatic tour of the Mideast. It also came as a new New York Times poll reported that 64% of Democratic voters, citing his age and erratic performance, want someone other than Biden to be the party’s presidential candidate in 2024 and “voters nationwide have soured on his leadership, giving him a meager 33% job-approval rating.”

Despite Newsom’s repeated denials of presidential ambition and his declarations of “unwavering support” for Biden and his agenda, the Washington visit drew heavy attention from the national political media, which place him on the informal list of candidates-in-waiting should Biden not seek a second term.

So is Newsom really beginning to campaign for president? Not overtly, perhaps, but by escalating his attacks on Republicans and lamenting his own party’s inactivity, he will continue to draw that attention.

The New York Times poll and open demands from the Democratic left that Biden stand down indicate that 2024 could be an opportunity for him, if he wants it. Although Newsom has voiced support for Vice President Kamala Harris, a fellow Californian, as an eventual successor to Biden, her political standing is also shaky and she would not be the automatic replacement.

Thad Kousser, a political science professor at UC San Diego, had it right when he told the Associated Press, “This is Gavin Newsom building his national brand for whatever opportunities might come up in the future.

“He’s savvy enough to know a lot of dominoes would have to fall for his future to come in 2024, but that makes it even more vital to take every opportunity to stay in the national consciousness for 2028.”