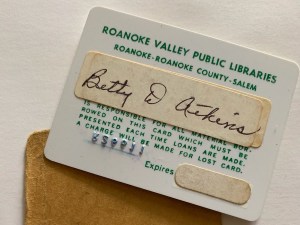 Growing up, my family was always reading. From as early as I can remember, my parents instilled in us a love of books, and — having very little money — an appreciation for the public library.

Barely scraping by most weeks, you can imagine that our budget to travel was nonexistent. But, my mom taught us that we could go anywhere in the world with a trip to the library.

Whether I was following the yellow brick road in my favorite book, The Wizard of Oz, or exploring a New York City borough in A Tree Grows In Brooklyn, my library card was my passport. To this day, one of my prize possessions is my mom’s Roanoke Valley Public Library card.

At the library, it doesn’t matter how much money you have or how many degrees are on your wall. Libraries are a resource for everyone and a critical cornerstone of our communities.

That’s why my colleagues in the Legislature and I ensured that the last two state budgets made enormous investments in our local libraries, funding everything from modernization and renovation projects, to expanded broadband and English as a Second Language services, and free summer meals for children in lower-income areas. In my own Senate District 39, this year’s budget funds are going toward a brand new Oak Park branch, and supporting future construction and expansion plans for the San Carlos, Ocean Beach, and University City branches.

My love of libraries runs as deep as my love of Dolly Parton (and those who know me know that’s saying a lot), and I couldn’t agree with her more when she says, “You can never get enough books into the hands of enough children.”

With Dolly, that’s no lip service. Using her influence and empire, she created Dolly Parton’s Imagination Library, a children’s literacy program that mails free, high-quality books to children every month from birth to age five. To date, the program has given more than 186 million books to children across the world!

Now, thanks to funding in the latest state budget and Senate Bill 1183, which I co-authored with Sen. Shannon Grove, a Republican from Bakersfield, the Imagination Library is coming to California.

With this new statewide program, 2.4 million children across our state will be able to build out their home libraries, creating lasting memories and a love of books before they get to kindergarten. In fact, 97% of parents whose children are enrolled in the Imagination Library reported that their kids were better prepared for their first day of school because of it, and 75% of teachers agreed.

That is huge, because research has shown that when a young child enters kindergarten ready for school, there is an 82% chance they’ll master basic skills by age 11, compared to a 45% chance for those are not.

Dolly has said that out of all her many accomplishments, her dad was most proud of the Imagination Library and her work to increase literacy for all children, no matter how much money their parents have or where they live. I like to think my parents would feel the same.

Toni G. Atkins is president pro tempore of the California Senate. As senator for District 39, she represents the cities of San Diego, Coronado, Del Mar and Solana Beach.