Opinion: It’s Time to Repeal AB 5 for Every Independent Worker in California 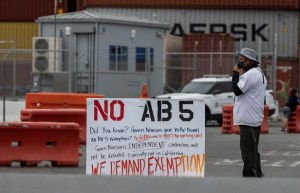 A truck driver helps to block the entrance of trucks at a container terminal at the Port of Oakland to protest AB 5. REUTERS/Carlos Barria

California’s onerous Assembly Bill 5 law has finally caught up with the trucking industry, slamming the brakes on more than 70,000 independent owner-operator truckers whose preferred business model has functioned uninterruptedly for decades in the state.

AB 5, which went into effect in January 2020, is a disastrous policy that reclassified most independent contractors as employees, destroying the flexibility many independent professionals chose. The trucking industry, however, had a short reprieve from AB 5 until just recently, when the U.S. Supreme Court declined to take up California Trucking Association’s appeals case against AB 5.

Independent truckers now face an existential threat to their livelihoods in the same dramatic way that more than 600 categories of freelance professionals have already experienced since AB 5 first detonated over California’s independent workforce.

Independent truckers know AB 5 will destroy their livelihoods, but they won’t be the only ones who feel the implications. Harbor Trucking Association estimates that 30% to 40% of drivers will leave the market, resulting in substantial capacity loss. Additionally, operational costs for motor carriers will likely increase by 100%, leading to even more rampant inflation for consumers.

With more than 40% of the nation’s imports arriving through Los Angeles and Long Beach ports, California’s unfolding supply chain disaster will become the nation’s disaster in short order.

But lawmakers and Big Labor are not going to play catch and release now that AB 5 has captured their biggest target to date — trucking. After all, stripping drivers of their independence is designed to increase union membership and expedite Sacramento’s climate goals. If independent truckers are converted to employees, motor carriers will assume the cost of new zero-emission vehicles.

Instead of scrapping AB 5 to avoid this mess, Newsom and the legislature will do what they have done from the inception of the AB 5 disaster: throw taxpayer grant money at the problem to “help” entities comply with AB 5. They’re currently doling out $49.5 million in grants to promote AB 5 compliance in the performing arts sector.

Newsom will propose the same temporary fixes for trucking, promising big bucks to certain associations for distributing funds for compliance while also setting up a divide-and-conquer scenario wherein some will benefit and most will get left in the cold. We’ve seen this movie before with AB 5. We know what to expect.

Other industries have tried everything to stop AB 5 from destroying their livelihoods, but the courts have offered no recourse.

Rideshare companies are in the midst of their own never-ending litigation now that Proposition 22 has been ruled unconstitutional by a Superior Court judge in Alameda County. The International Franchise Association — another big target of labor — was left in limbo when a U.S. District Court in California dismissed its AB 5 lawsuit.

Additionally, the American Society of Journalists and Authors’ appeals case against AB 5 was recently declined by the U.S. Supreme Court. Now, most freelance videography journalism, among other types of freelance broadcast journalism, is effectively banned in California.

The only way to get this AB 5 monkey off of everybody’s back is for major industries — trucking, franchising, tech, rideshare — to join forces with the rest of the freelancer movement to help fund a ballot initiative to repeal AB 5 in its entirety for everyone. It could be called the “Save Self-Employment and Small Business” initiative.

A mile-long roster of business and professional associations would support it. Voters who are sick and tired of witnessing the utter destruction of the lives and livelihoods of hardworking Californians would support it, too.

No more individual carve-outs via litigation or legislative action. It must be all for one and one for all if we want to pull this putrid law out of California for good — root and branch. Repeal AB 5 for everyone.

Karen Anderson is the founder of Freelancers Against AB 5.