Opinion: Pro-Lifers Are Really Pro-Birth, Without Concern for What Happens Next 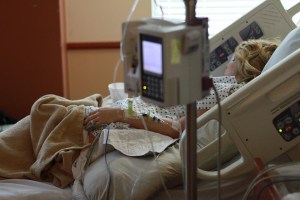 A pregnant woman in a hospital. Photo via Pixabay

Those who call themselves pro-life are, to say the least, a self-deceiving lot; they’ve been convinced — from without and from within — that all fetuses should go to term and be born, no matter the consequences to the safety of the woman, the child, the family, or the planet.

If these people were pro-life, they would place as much value as they do on conception and fetal development as they would on post-birth humanity and the societal structures to support a human being from 0 to 18. Examples of what the pro-life cohort should value, in a more just society, are easy to come by.

People who are pro-life value the safety of children in school, so they’d support a ban on all assault weapons, the ownership of a gun until the age of 21, and a gun-owner’s rigorous licensing procedure to include mandatory, certificated training, renewal tests, and more — just as we do with drivers’ licenses.

People who are pro-life value the life of a mother-to-be and fund clinics that protect the health of the pre-born and the born. Pro-lifers accept that a woman’s reproductive right is encased in her relationship with her doctor and am equally involved conceiving partner.

Men who are pro-life, whether as IVF donors or as the source of a fetus’s existence, take full responsibility for their role from the point of conception onward. Pro-life men take a paternity test, pay for half the medical costs of the pregnancy and birth, sign an affidavit to support the child until age 18 — if he does not, the pro-life state will garner his wages sufficient for the child’s benefit.

If men are not named or fail their responsibility to the fetus or the child — in short, if the woman does not name him or the father absconds — the pro-life state should pay for a substantial amount if not all of the child’s welfare.

People who are pro-life believe in life before and after birth because they see themselves as financial, social, and spiritual stewards of life. The sanctity of life — a catchphrase that has devolved to mean God bets only on those who make it to the starting gate — applies to the well-being of all persons, as fetuses, as children, as human beings.

If you who are pro-life value personhood, include in your definition the person who has been forced by the state to be born. Think, not of yourselves or your political/religious agenda, but of the mothers most of whom you don’t know and who already have children and do not want or cannot support another child; think of most fathers who rarely take responsibility or are pushed beyond their means to provide for enlarged families; and think how sanctified life can actually be if it is cruelly forced on men, on women, on families who in most cases — along with the child born into their milieu — can seldom live up to your pro-birth agenda, a force majeure, which they never bought into anyway.

What right does a pro-birther have on a woman and, by extension, her family, who does not or cannot share that value? Think how a society in which values are not decreed but voluntarily shared, consensus-driven, how those values should be the ne plus ultra of our moral existence and the kind of society we all want to live in.